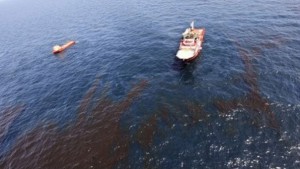 There are a lot of uncertainties right now about the Gulf oil spill. But one thing is clear: In addition to the intangible loss of wildlife, it’s going to cost BP a lot of money.

Under current law an oil well’s owner is responsible to foot the bill for the entire cost of clean up in the event of a disaster. In this case that includes BP and minority partners Anadarko and Mitsui.

Clean up costs are currently running about $6 million a day, according to BP. Those include the cost of running the remote submarines that are trying to close the well, the drilling rig that’s needed to permanently cap the well, and the boats corralling and removing the oil from the water.

And with the government mobilizing to help in the clean up, it also includes reimbursing any costs that the Coast Guard or Navy incur above their normal operating expenses.

But these costs will jump once the slick makes landfall. “That’s when the costs really start to mount,” said Steve Potter, a vice president at SL Ross Environmental Research, a consulting firm that specializes in oil clean up techniques.

Cleaning an oil spill on land is much more labor intensive than doing so at sea, said Potter, as it involves paying lots of people to put up barriers, scrub beaches and skim wetlands.

He said BP can expect to spend at least double what it’s shelling out now once the spill hits shore.