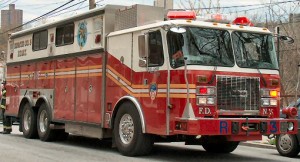 Mayor Bloomberg is giving a reprieve to 20 fire companies on the chopping block – at least for now.

He’s counting on Albany to come through with some last-minute cash when the Legislature finalizes a spending plan – one that is already 48 days late.

“We don’t have a budget yet, and until then, there’s no reason to do anything. There is a requirement of 45 days’ notice before you close a company or a firehouse and we will comply with the law.”

Hizzoner had been expected to send out the notices Monday, 45 days ahead of the July 1 start of the city’s new budget.

The city faces a $1.5 billion budget gap, and closing the fire companies would save the city $5.6 million. But Bloomberg said he wants another peek at the financial forecast.

“I’d like to have another five or six weeks of [city] tax revenues information, see how tax revenues are coming in.”

The governor, sources said, stood his ground: “I hope you never have to stand in a room and face criticisms that don’t contain a single fact in them.”