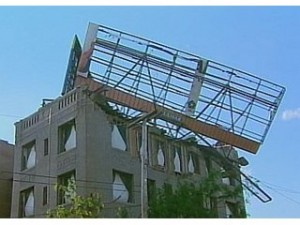 Bridgeport, CT – National Weather Service has confirmed that the storm that rocked Bridgeport Thursday evening was in fact, a tornado – and it sure looked like it.

The fast moving storm left such a massive path of destruction, with at least nine downtown buildings in ruins, cars smashed and trees toppled. In his 45 years of living in Bridgeport, the mayor has never seen anything like it.

Residents of Bridgeport, Conn. began what will undoubtedly be a long process of clean-up, repair and recovery on Friday after a severe summer storm rocked the city Thursday night.

In total, nine buildings were heavily damaged and 25 people were injured in the fast-moving storm. While none of the injuries were life-threatening, it is certain that many lives have been and will continue to be disrupted.

The National Weather Service has yet to determine if what touched down in Bridgeport was just a devasting summer storm or if it was actually a tornado that rattled the city, left battered. Trees toppled onto homes and were blown over in city parks. There were lots of broken windows on buildings and on cars.