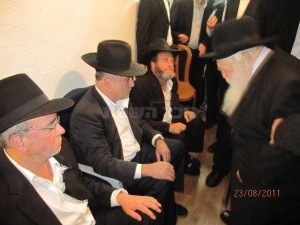 HaGaon HaRav Chaim Kanievsky Shlita made a shiva visit to the aveilim mourning the loss of Rabbi Rafael Halperin z”l. The aveilim are sitting shiva in Bnei Brak, the home of the late rav z”l. The rav was niftar on Shabbos, in his home, at the age of 87.

He was born in Vienna, and arrived in Palestine at a young age with his parents. During his early years, he focused on sports, weightlifting and martial arts, becoming a champion, earning the title Mr. Israel. He moved to the United States for a number of years, working as a professional wrestler in the US during the 1950s. He ultimately returned home, and after the 1973 Yom Kippur War, he strengthened his observance in Torah and mitzvos, becoming an outspoken voice towards persuading people to close their shops on Shabbos. At one point, he worked on developing a chip that would be incorporated into credit cards, rendering them inoperable on Shabbos.

He became a most successful businessman in Israel in his own right, launching Halperin Optical, offering quality eyeglasses and related services at a sharply reduced price, ultimately spreading out to 120 branches nationwide.

In addition to his encyclopedia Beis Yisrael, he was well published in other areas, including kashrus. Many viewed him as a leading authority on matters pertaining to Torah and technology.

The rabbi is survived by his wife and seven children, as well as over 50 grandchildren and great grandchildren.