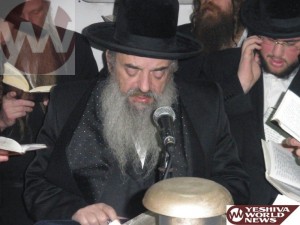 Lelov Chassidim in Beit Shemesh were called upon to attend an event in Moshav S’dot Haaretz near Beit Shemesh where they merited meeting with the Rebbe Shlita, who according to reports requested participation in a kinos on erev rosh chodesh.

Perhaps to the surprise of the tzibur, the Rebbe did not only deliver a powerful rosh chodesh message of words related to the end of bein hazmanim as many expected, but he spoke about the Blackberry ® and iPhone ® and the prohibition of using such devices – even for one’s business towards earning a livelihood. One of the chassidim held up one of the very units mentioned by the Rebbe and smashed it before the tzibur, adding that in the near future a vaad will be established in the Chassidus to address similar to the Vaad Rabbonim for Cellular Telephones that exists, responsible for today’s so-called kosher phones.

The Rebbe joins the ranks of the Belzer, Toldos Aaron ad Dushinski Admorim Shlita, all of whom used their respective tishin to speak out against the smart phone devices.

Hundreds of chassidim were on hand Monday when the Rebbe spoke about the prohibition of owning and using such a device, on Yom Kippur Katan, erev Rosh Chodesh Elul. Also present was the Admor’s brother, the Leluv Rebbe Yerushalayim Shlita.

Many were taken aback as the Rebbe dedicated a full 15 minutes addressing the prohibition surrounding the phones, singling out Blackberry ®, even towards assisting one in earning a parnasa.

It appears the vaad will roam among the chassidim towards learning who is defying the ban, those who opt to disregard the Rebbe’s words and use a non-kosher phone.