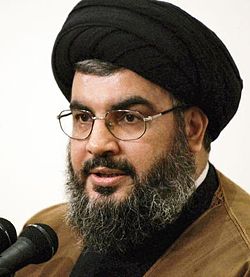 Hizbullah leader Sheikh Hassan Nasrallah praised Hamas leaders for their victory over the Zionist entity in bringing Israel to its knees, agreeing to release 1,027 terrorists for the return of Gilad Shalit.

The same message was echoed by leaders of Jordan’s Muslim Brotherhood, with Hamman Said calling it a major victory for “all Arab nations and Muslims alike”.