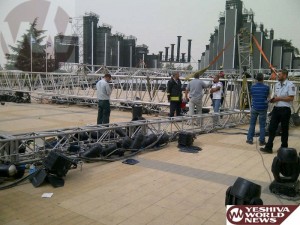 Despite the fatal accident during rehearsal at Mount Herzl on Wednesday, 26 Nissan 5772, officials have announced next week’s Memorial Day and Independence Day events will take place as planned. The tragedy occurred when scaffolding collapsed, killing IDF 2nd Lt. Hila Bezalali, 20, from Yerushalayim, and leaving others injured, one moderately. There was speculation that the tragedy would result in the cancelation of next week’s events since the victims were taking part in rehearsals for those very same events when the scaffolding came crashing down.

Knesset Speaker Reuven Rivlin commented on the magnitude of the tragedy, adding the planned events will take place as scheduled.

IDF soldier Hagar Zohar, 20, from Gadera remains in moderate condition in an intensive care unit in Hadassah Ein Kerem Hospital. She is among the injured. She sustained a head injury and remains in a medically induced coma on a respirator.

She is a lone soldier, returning to Israel from the United States, telling her friends “this is home” and that she could not stay away. She returned from the US after yomtov following a visit with family. Her mom, who was planning to surprise her and attend next week’s ceremony to see her take part in the event is now on her way to take a place next to her ICU bed.