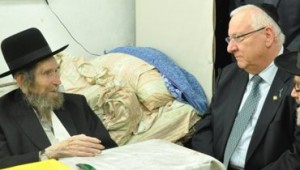 In the meeting today, with HaGaon HaRav Aaron Leib Shteinman Shlita, Knesset Speaker Reuven Rivlin explained the months ahead will be “critical” regarding the bnei yeshiva velt and the Tal Law.

The speaker was received warmly by the rav, with the former meeting with gedolei yisrael as an emissary of Prime Minister Binyamin Netanyahu. He recently met with the Belzer Rebbe Shlita as well as with Maran HaGaon HaRav Ovadia Yosef Shlita during Pesach.

Rav Shteinman reportedly told Rivlin “We must make certain that every bachur who wishes to study Torah is permitted to do so”. The speaker promised the gadol hador he will do all in his power to permit the Torah community to continue studying Torah as is the case today.