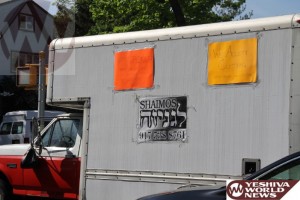 The contents of this abandoned “Shaimos Truck” are a bit different then the first two.

This latest truck was found in Flatbush on Avenue M and East 22nd Street, where it’s been sitting gathering parking tickets since it was parked there just before Pesach started. Except what was found inside this truck is a bit different.

Apparently, to entice people to sell their Shaimos to their trucks, the people running this operation started putting signs on the trucks stating that they “accept clothing” – meaning clothing dropped off, will be given to the needy. (The previous story had an unclear sign which read “We accept cloth” [see image]). Sadly, this clothing never went to any needy people. All those who dropped off their clothing at the trucks parked on Nostrand Avenue and Avenue M (in front of Rabbi Sherer’s Shul), or on Coney Island Avenue and Avenue L (across from Pomegranate parking lot), can go to the abandoned truck on Avenue M and East 22nd Street and take it back. The truck is unlocked, and open for you to go in. Besides being a bit moldy and smelly, the clothing should otherwise be perfect.

UPDATE: An individual involved in the Shaimos Truck tell YWN that “the clothing on the truck was collected up until erev Pesach and the operator has been investigating where to give this clothing to and intends to find an appropriate place before returning the truck as it was on a one month rental. Since the operator is heading back to Yeshiva in Israel on Sunday he has had every intention of doing so before then.”