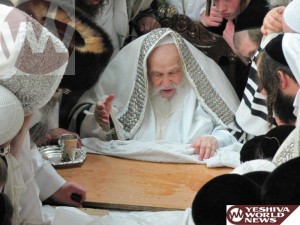 The rebbe collapsed in the Meah Shearim beis medrash during shachris. Baruch Hashem, a spontaneous pulse returned after CPR was performed by Ichud Hatzalah EMTs. The rebbe, who is 88, was transported to Bikur Cholim Hospital in critical/stable condition.

The tzibur is asked to be mispallel for Rav Avrohom Chaim ben Sima b’soch kol cholei am yisrael.