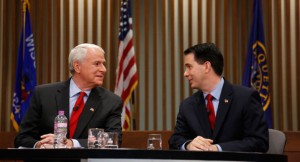 Wisconsin is no stranger to the role of political battleground, but its intense year and a half in the national spotlight culminates Tuesday with voters heading to the polls either to keep the state’s Republican governor or throw him out of office in the middle of his term.

Gov. Scott Walker faces a recall election over his contentious battle with public employee unions over limits on their power. Republicans have argued the limits are necessary to reign in state and local spending, while Democrats have rallied behind the unions, accusing Walker and Republican lawmakers of overreaching.

By the Tuesday’s end, Walker either will keep his job or be voted out in favor of Milwaukee Mayor Tom Barrett, the same challenger Walker defeated in November 2010.

Polls have tightened leading up to Tuesday’s election but still seem to show Walker with a slight edge. Both sides are hoping for a victory in Wisconsin to send a broader message of party strength nationwide heading into November’s general elections.

“Now it’s our turn to speak,” an exuberant Barrett told campaign workers Monday in Portage. “We the people of the state of Wisconsin are going to reclaim our future.”

During Monday’s first campaign stop, Walker said he expects a close race, too, and he’s focused on turning out voters who supported his efforts to take on public-employee unions.

“We want to move on and move forward,” Walker said at a plastics plant near Madison. He was joined by his wife, Tonette, who wore a button that read “Luv My Gov.”

Walker planned other campaign stops at a brewery in Stevens Point and a distillery in Green Bay before wrapping up with a nighttime rally in Milwaukee.

Barrett was spending most of Monday in western and northern Wisconsin before ending his day with a rally at a United Auto Workers union hall in Kenosha.

Walker is only the third governor in U.S. history to face a recall vote. The other two lost, most recently California Gov. Gray Davis in 2003. Wisconsin’s recall election is a rematch of the 2010 governor’s race in which Walker defeated Barrett by 5 percentage points.

Anger over Walker and his conservative agenda began building almost as soon as he took office in January 2011. Just a month into his term, Walker took the state by surprise with a proposal to effectively end collective bargaining rights for most state workers — a measure he said was needed to ease budget problems. The recall idea emerged soon thereafter.

But the recall petition drive couldn’t officially start until November, months after Walker signed the union changes into law. Organizers hit the streets a week before Thanksgiving and spent two months gathering more than 900,000 signatures — about 360,000 more than were needed to trigger the election.

Walker, the 44-year-old son of a minister, has remained unflappable throughout the campaign just as he was during the massive protests that raged at the Statehouse for weeks as lawmakers debated his proposal.

Along the way, he’s become a star among Republicans and the most successful fundraiser in Wisconsin politics, collecting at least $31 million from around the country since taking office. That obliterated his fundraising record of $11 million from 2010.

About $63 million has been spent on the race so far, including $16 million from conservative groups such as the Republican Governors Association, Americans for Prosperity and the National Rifle Association.

Democratic groups — including those funded by unions, the Democratic Governors Association and the Democratic National Committee — have poured in about $14 million, based on a tally from the government watchdog group the Wisconsin Democracy Campaign.

The majority of Walker’s donations have come from people outside Wisconsin. Most of Barrett’s $4.2 million came from inside the state.

The race has broad implications for national labor unions. It’s also seen as a proxy fight for the presidential election, especially given the importance of Wisconsin and its 10 electoral votes.