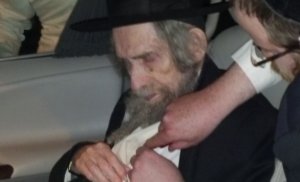 Among the hundreds of thousands attending the levaya of Maran Posek HaDor Maran Rav Elyashiv ZT”L was Maran HaGaon HaRav Aaron Leib Shteinman Shlita, who was present at the levaya for a number of hours. Alongside his vehicle was HaGaon HaRav Chaim Kanievsky Shlita [a son-in-law of the niftar zt”l], both given a police escort the entire time.