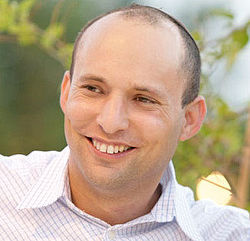 The right-wing Ichud HaLeumi and Bayit HaYehudi Parties have been working to unite and run under a joint list in the upcoming 11 Shevat 5773 general election. After the recent election of Naftali Bennett as the new head of Bayit HaYehudi, the polls show the party will receive about nine seats in the next Knesset, even without merging with Ichud.

As such, the notion of running under a joint list appears less attractive to some Bayit HaYehudi members, Walla News reports. Complicating things even more is the reality that Icud continues to insist that Ichud’s Uri Ariel receives the second slot on a joint list, and Bayit HaYehudi officials simply do not see the need for such an arrangement considering the newly gained party popularity.

On Monday 19 Kislev, the Bayit HaYehudi Central Committee plans to convene to discuss the matter. A final decision is expected sometime next week.