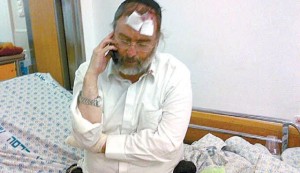 There are now three suspects in custody as police continue probing last week’s assault against Nati Grossman, an editor of the HaPeles Newspaper affiliated to the split off faction of Degel, now siding with the Netzach party.

One suspect, who was taken into custody today, 10 Teves 5773 at about 02:00, apprehended in a Ponevezh dormitory, was remanded for additional five days as the investigation against him continues. He is viewed as the primary suspect in the case and police explained the additional days were required to permit completing the investigation in advance of filing a criminal indictment.

A second suspect was remanded for an additional 24 hours. He was arrested in Bnei Brak as well.

Later in the day, a third suspect was also taken into custody, apparently tied to the assault by eyewitness reports.