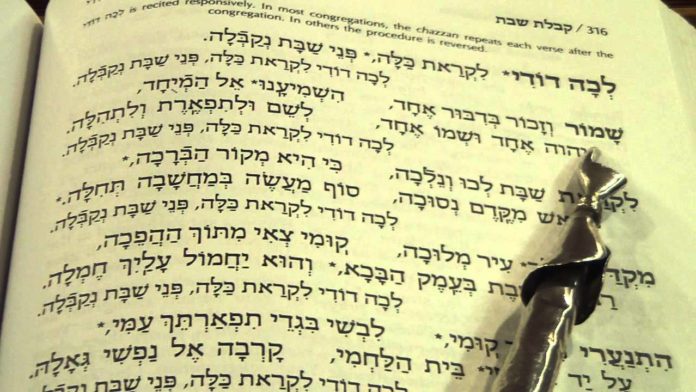 It may come as a shock to most people but the Friday night Kabbalas Shabbos piut of Lecha Dodi is actually an elaborate introduction to a different Tefillah. It is a Tefillah that is made up of two words and it comes at the very end of the Lecha Dodi (right before the last refrain).  The two word Tefillah is, “ bo’i Kallah – Come [Shabbos] bride.”  It is repeated twice [and some say a third time silently – The Shla says to recite Bo’I Kallah three times aloud and the third time to add Shabbos Malkata].

The Lecha Dodi was written in the sixteenth century by Rav Shlomo HaLevi Alkabetz from Salonika Greece.  The two-word Tefillah is found in the Gemorah itself – Shabbos 119a and dates to right after the Mishna.  Indeed, the Ben Ish Chai (Parsha Vayera 5) states that the two word Tefillah is more obligatory to recite than the Lecha Dodi – since Chazal said to say it.

The Gemorah cites the recitation of Bo’I Kallah twice as the practice of Rabbi Yannai.  Rabbi Yannai was of the first of the Amoraim and a Talmid of Rabbi Yehudah haNassi.  The Gemorah tells us that Rabbi Yannai would put on his Shabbos clothing and recite, “Come bride, come bride.”

In Rav Chaim Vital’s Pri Etz Chaim (Shaar HaShabbos), he writes that when the person recites these words, he should have in mind that he is accepting upon himself his neshama yesairah – the extra soul that Shabbos brings.

THE REASONS FOR RECITING IT TWICE

The Tikunei Zohar  (Tikun 24 p. 69a) states that it correspond to the pasuk, “And Hashem blessed the Seventh day and sanctified it.”  One recital of it brings forth Hashem’s blessing and the second brings sanctity.

The Maharsha (Bava Kamma 32b) provides a different explanation.  He says that it corresponds to when a bride leaves her father’s house and goes to the Chuppah and the second one is when she enters the home of her husband.

Seemingly, we commemorate the arrival of Shabbos and then the bringing of the Shabbos into our homes.

We should certainly concentrate on the latter two words of Rabbi Yannai.  There is great bracha and power in these two words.