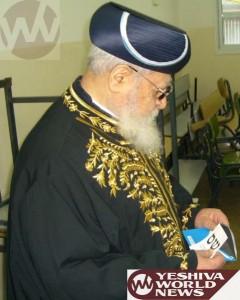 Maran HaGaon HaRav Ovadia Yosef Shlita during his Monday morning 10 Shevat 5773 shiur spoke of the “gezeira to draft Bnei Torah”. The Gadol Hador called on the Ashkenazi tzibur to vote Shas too to show hakoras hatov.

The rav spoke of the obligation to vote for Shas, stating “morai v’rabbosai, I am troubled. My heart aches over the bad thoughts chilonim have about us, the haters of Torah. They wish to draft Bnei Torah, those who study Torah day and night and give nachas ruach to HKBH. I am troubled over this. Who will learn Torah? Who will keep the world going?…”

The rav stressed Shas is not about cabinet seats. “How can we remain silent as such a time? We must act as one and vote Shas to strengthen the Torah, to strengthen Yahadut. This movement was established to strengthen Torah, not for [cabinet] seats.”

The rav concluded by calling upon the Ashkenazi tzibur to vote for Shas to show hakoras hatov for the many apartments they received from the Ministry of Housing, which is run by a Shas minister. “It is not an Ashkenazi Sephardi thing, we have one Torah and we must strengthen the Torah.”