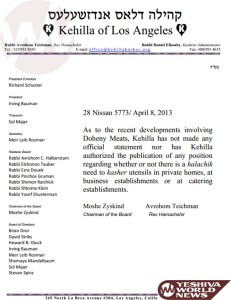 The following is the only official statement released by the “Kehillah Kosher” Kashrus agency in Los ANgeles, regarding the Doheny meat scandal, reported extensively on YWN.

It should be noted that Doheny Meats was not under Kehillah Kosher certification, but under the RCC.

As to the recent development involving Doheny Meats, Kehilla has not made any official statement or has Kehilla authorized the publication of any position regarding whether or not there is a halachik need to kasher utensils in private homes, at business establishments or at catering establishments.

Moshe Zyskind
Chairman of the Board