13:29 IL: Preliminary information from Yehonai Jabotinsky Street in Beersheva – A bank robbery occurred in which guns were fired. Unconfirmed reports from the scene indicate four or five people are wounded. Their condition is not known. Ichud Hatzalah reports that there may be hostages.

Israel Radio Reshet Bet adds a female is being held hostage at this time. Israel Police Yomam commandos are en route to the scene.

13:34:
The Israel Police Yomam SWAT unit is responding to the Bank Hapoalim on Jabotinsky Street in Beersheva. Magen David Adom spokesman Zaki Heller reports four of the wounded are in very serious condition. Israel Radio Reshet Bet reports they have died of their wounds.

The bank is locked down at this time as police are keeping EMS and other responders at a distance until the situation is secured.

13:38:
It appears there is only one armed perpetrator in the bank. The area of the Bank Hapoalim is shut down as local police await the arrival of the Yomam SWAT team.

13:42:
Bank employees are among those hit by gunfire in the Bank Hapoalim on Jabotinsky Street in the N’vei Ze’ev neighborhood of Beersheva, Channel 2 News reports. There appears to be only one gunman, who is holding hostages. Police on the scene continue to await the arrival of the SWAT team.

13:47:
Students in a school located near the bank are not being permitted to leave the building. The Israel Police Yomam SWAT team and hostage negotiators are operating on the scene. MDA spokesman Zaki Heller reports at least seven people in total were hit with gunfire. At least one person was transported to the trauma unit of Soroka Medical Center. At least four of the victims have died of their wounds.

13:54:
It appears one of the wounded transported to Soroka Medical Center in Beersheva is a bank robber. He is under arrest as he undergoes emergency surgery. A second bandit is holding hostages in the bank.

14:08:
Police are confirming the perpetrator shot himself in an apparent suicide attempt. SWAT has entered the bank and a single female hostage in a hysterical state is being treated. There appears to be another wounded person inside the bank.

14:18:
The bank robber who shot himself was pronounced dead on the scene. The incident ends with a total of four fatalities, three men and one woman. Soroka Hospital reports a male with multiple gunshot wounds is in emergency surgery. It is believed that he is a second bank robber. At least one other person is being treated for hysteria at the hospital.

14:55:
The bank robber entered the bank and began shooting immediately. In addition, the bank branch targeted is a mortgage bank. As such, it does not maintain sums of cash. These two facts lead investigators to believe that the armed incident was not a robbery, but possible a revenge attack. 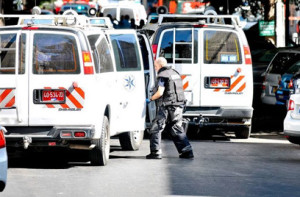