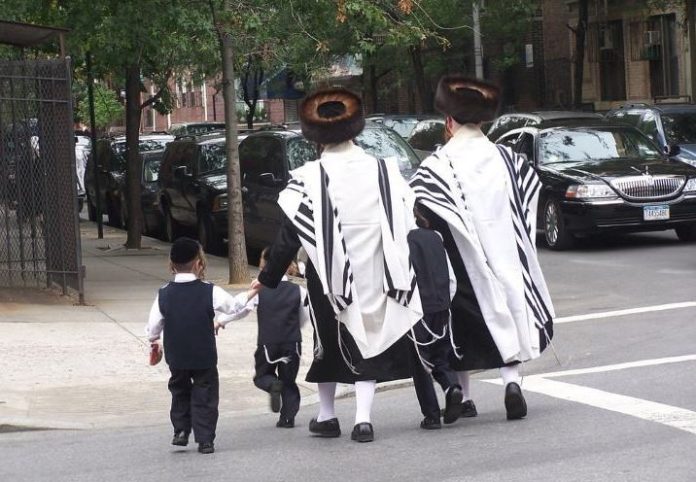 Hate has once again reared its ugly head in Williamsburg, as a Hasidic man was assaulted in an unprovoked attacked this past Shabbos.

The incident happened at around 1:15AM on Broadway near Lynch Street, when the man – wearing his Shtreimel and Bekeshe – was confronted by a group of thugs. Without saying a word, one of the men walked up to the victim and punched him in the face. Another suspect added some anti-semitic slurs at the man including “you (expletive removed) Jew!”

The group fled the area.

Thankfully the man was not seriously injured.

The NYPD hate Crimes Task Force is investigating the incident, and has released the footage attached below. There is a $2500 reward being offered.

The attack caught the attention of New York Governor Andrew Cuomo who released the following statement on Monday morning:

“I am appalled and disgusted by the apparent attack on a Jewish man in religious attire in Williamsburg. This abhorrent act of hate-fueled violence is deeply disturbing, especially in the wake of a reported spike in hate crimes and anti-Semitic incidents over the past year.

“In New York, we have zero tolerance for such abhorrent acts of anti-Semitism. Crimes like this are not just wrong – they are illegal. I have directed the New York State Police Hate Crimes Task Force to provide the NYPD with any resources needed to assist in the investigation to ensure those responsible are held accountable to the fullest extent of the law.

“We will always stand with the Jewish community against anti-Semitism in all its forms. There is no place for hate in our State, and we must continue to stand united against the cancer of division and hate spreading across our nation.”

More and more, we're seeing how unsafe it's become to be visibly Jewish in New York City. Sickening. And frightening.https://t.co/aQJ9m7TcsZ via @ywn

The ADL (Anti-Defamation League) announced that it is offering a reward of up to $5,000 for information leading to the arrest and conviction of the individual or individuals responsible for the alleged assault.

“We are alarmed and deeply concerned that yet another violent anti-Semitic incident has occurred in Brooklyn, said Evan R. Bernstein, ADL NY/NJ Regional Director. “This is unacceptable, and the hate must stop. The fact that this alleged attack took place during the Sabbath makes it even more egregious. We will continue to work together with all New Yorkers to stem the tide of anti-Semitic violence and hope that this reward facilitates the swift apprehension of those responsible for this attack. We thank the NYPD Hate Crimes Task Force for investigating.”

Anyone with information about this incident is encouraged to call NYPD Crime Stoppers Hotline at 1-800-577-TIPS.