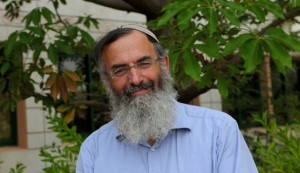 Rabbi David Stav was verbally assaulted and insulted by a number of bnei yeshiva as he left a chasenah in the Concord Hall in Bnei Brak on Sunday night, the eve of 9 Tammuz 5773. The rav was attending a wedding of a son of Kosel Rav Rabbi Shmuel Rabinowitz. During the wedding, he was received warmly by Rabbi Rabinowitz and was seen seated and speaking with Mekubal Rav Binayahu Shmueli.

The rav joined those guests being mesamayach the chosson in dancing, and when he entered the circle, Knesset members of Yahadut Hatorah and Shas ostentatiously left the circle. When Rabbi Stav left the hall, a number of talmidei yeshiva waited outside began shouting at him. They called him a “sheigetz” among other unacceptable terms.

Rav Stav told reporters that yes, “the unpleasant occurrence did take place as reported but most were pleased to see me and many chareidi youths asked for a bracha and were pleased to shake my hand.”