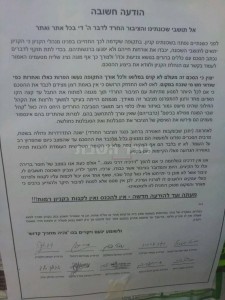 It would appear the cherem placed on the Ramot Yerushalayim Kenyon Ramot Shopping Center by prominent community rabbonim has persuaded management to talk a deal. The rabbonim felt the shopping center was not meeting basic community tznius and after dialogue failed to compel management to comply with the directives of rabbonim, the cherem was announced. The managers of the shopping center are now signaling a willingness to reach a compromise agreement with the rabbonim. Despite an announced secular activist call to assist the shopping center, the managers realized without the chareidi shoppers, the mall has no future.

Maariv reports that with the assistance of senor City Hall mayoral advisors, the managers of the center have been holding talks with representatives of the rabbonim towards ending the cherem. Among the concessions by management is a willingness to refrain from playing female singers on the public address system and to make certain that events hosted in the mall for children will conform with community tznius standards. Employees in the various stores will be permitted to dress as they see fit. A mashgiach will be appointed to ensure compliance.

While mall operators have shown their willingness to back down, it remains to see if the concessions are sufficient for the rabbonim to lift the boycott.