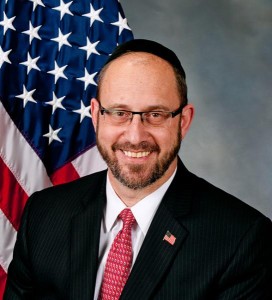 Calling the latest voting literature from the Board of Elections “ridiculous,” Senator Simcha Felder (D-Brooklyn) is urging constituents who may be confused about their polling site locations to contact his office for assistance.

“The mail from the Board of Elections is poorly-designed, confusing, and looks like junk-mail,” said Senator Felder. “I suspect most prospective voters will end up tossing it in the garbage without realizing that it contains important content. It’s just ridiculous.”

Senator Felder wants voters to review the voting booklet which lists new polling site and election date information. In addition to English, the booklet is written in four other languages with randomly placed graphics, including an ominous looking exclamation point inside a triangle. The mailer began hitting mailboxes yesterday.

“Each election cycle, there is always a lot of talk about voter disenfranchisement,” Senator Felder added. “And a major contributing factor is the sloppy way in which the Board of Elections continuously fails to engage New York City voters. ”

The primary election is set for September 10, with a run-off election scheduled for October 1.