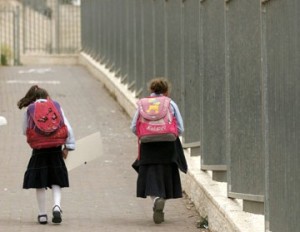 Jerusalem City Councilman (Shas) Asher Mishali turned to Education Minister Shai Piron asking what is being done for 160 frum girls who still have not been accepted to a high school in the city as the opening of the 5774 school year approaches.

The councilman told the minister that to his profound sorrow, the discrimination against Sephardi girls continues in the capital. He pointed out that with opening day of the school year about two weeks away, no one seems interested in addressing these girls that do not know what to do. Despite stern campaign promises, even Shas leader MK Aryeh Deri, who vowed to have discriminatory schools shut down, has not publically commented on the situation.

Mishali points out the principals of the schools continue to ignore ministry directives and they reject the girls they do not want in their schools. He adds that he knows from personal knowledge that the students rejected who turned to the ministry committee for assistance; in 98% of the cases the ministry did nothing to assist them.

Mishali adds that discrimination is not limited to high schools, but parents in the capital report similar issues with their children in elementary and junior high schools in the frum sector.

He concludes his letter by pointing out the chareidi lawmakers in Knesset have not undertaken the battle to end the discrimination so he is hopeful that a minister from Yesh Atid will undertake the battle on behalf of these girls.