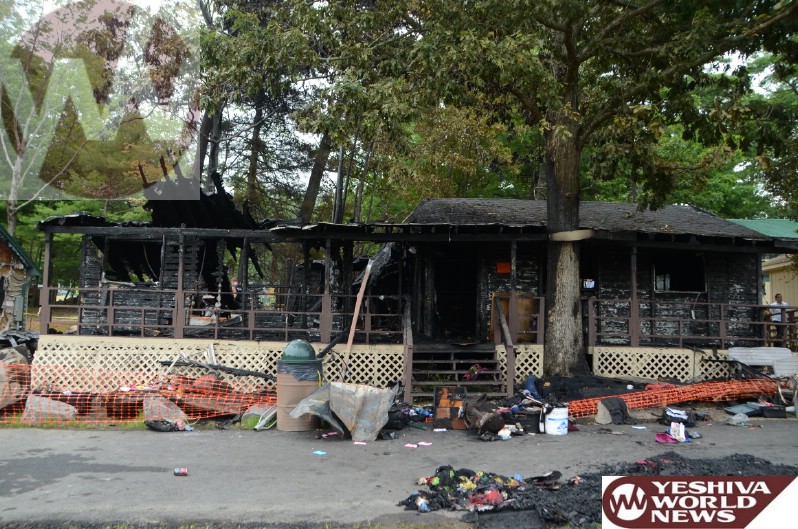 The fire was first noticed at 4:30 AM on Shabbos morning by a counselor who was awakened by the smell. Not waiting for smoke or flames, she quickly alerted all the counselors in the bunk, who evacuated campers within two minutes. One child, who requires a wheelchair, was carried to safety by two counselors. At the same time, counselors alerted the medical center, directors of operations, and adjacent bunks. Within 10 minutes, the camp had safely evacuated to a parking lot across a road, and a full census assured that all, staff and campers, were accounted for. Children and staff watched as fire engines rolled into camp to begin the hour-long process of containing the fire.

The conflagration destroyed the cabin, which housed two bunks of children and their counselors, 16 people in all. Another structure, a new cabin erected only this year, suffered damage and will be rebuilt.

Even before the Lumberland Fire Department arrived, their recent training at Camp Simcha paid dividends. This spring, as Camp Simcha prepared to demolish three bunks to make room for new, renovated structures, the Lumberland Fire Department performed search and rescue training in the empty structures. Now Bency Brown, Camp Simcha’s director of operations, who had observed the drills, entered the bunkhouse and patted each bed to make sure it was empty. He came outside and reassured the staff that everyone was safely outside.

As soon as the Lumberland Fire Department indicated that it was safe to enter the campgrounds, the girls and their counselors headed to the camp’s main building and into the dining hall. They were greeted with an early breakfast and Camp Simcha’s famous ruach.

“There was lots of singing…Chasdei Hashem, Hodu L’Shem Ki Tov…we were able to express our thanks that no one was hurt in the blaze,” explained head counselor Rivky Schwartz. “The girls, who were still in their pajamas and had been carried out without slippers on, still danced and sang.”

As the campers’ voices were lifted up in song, Camp Simcha’s maintenance staff was already hard at work. Though Saturday is their day off, the head of the staff had been alerted to the fire when it was first broadcast on the department’s internal radio. (“Another miracle,” joked Miss Schwartz. “He is related to the chief.”) Within minutes, the maintenance staff had assembled, ready to do everything possible to help the affected children. They brought mattresses to the main building so that the girls who no longer had a home still had a place to rest during the day. They also worked throughout the day to remake one of the bunks into a new home. 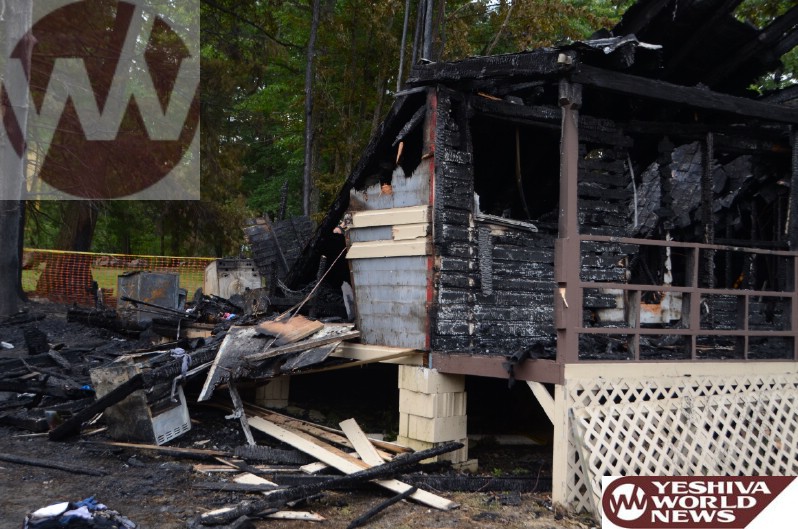 The camp’s administration and senior staff decided to keep to the structure of the day as much as possible. As their areas were cleared for occupancy, children returned to their bunks to rest and get ready for kiddush. The Bar Mitzvah of one of the camp doctors went on as planned, and afternoon activities included Camp Simcha Shabbos standards like Bingo, story groups, and choir practice.

Yet the staff knew this was no ordinary day, and pretending it was would not be to the benefit of campers or counselors. Miss Schwartz spoke at length at lunch about the fire and the small acts of heroism that defined the story and its protagonists. One child, at camp with her twin sister, had tried to retrieve her sister’s eyeglasses. When she couldn’t find them, she grabbed her sister’s teddy bear, choosing to save that instead of her own.

“So many children lost the blankets, cozies, and stuff animals that had sustained them through treatments,” said Miss Schwartz. “That was more devastating for them than losing their clothing.”

Since every child in Camp Simcha has undergone arduous treatment for cancer, they all knew what it was like to lose the item that had comforted them. And so they responded in kind. Bunks of children brought favorite clothes, stuffed animals or presents to the girls who had lost everything.

“It was so uplifting to see them give so selflessly. The girls really wanted to help their campmates. One child said, ‘If I was in the fire, this is what I would want someone to give me,’ and gave her preferred blanket to a child along with a big hug.”

Throughout the day, the division heads, Miss Schwartz, and Dr. Cheryl Greenberger, Chai Lifeline’s director of family and clinical services who happened to be in camp for the weekend, met with each division. They encouraged each child to tell her own story of her experiences that morning, offering validation for emotions that ranged from fear to confidence.

“I got through cancer. I can get through this,” avowed one pediatric survivor.

For many of the 25 Israeli campers, though, the fire brought back the terrors that they live with daily. Some thought that a missile had hit the bunkhouse; others talked about suspicious packages and bombs. Their counselors and the staff, who assured all that the fire was an extremely rare occurrence and that they were safe at Camp Simcha, comforted them.

The camp was concerned about counselors as well. Older staff members made themselves available to counselors who wanted to recount their stories and talk about their reactions to the fire. While fear was expressed, so was the satisfaction of coming through a trauma relatively unscathed.

“Every camp has to have a fire evacuation plan, and we practice with the entire camp. Some counselors told us they felt empowered because they knew exactly what to do in this emergency,” noted Miss Schwartz.

Camp Simcha’s medical staff, comprised of pediatric oncologists, nurses, and EMTs immediately set up a field station in the dining room. Every child and staff member in the affected bunks was given a full checkup, oxygen and nebulizer treatments. Five people were treated for smoke inhalation, but no one suffered serious injury or had to be confined to the medical center.

A Sense of Normalcy At the End of the Day

By the end of the day, the displaced campers and staff entered their new home at Camp Simcha. The bunkhouse usually used for medical purposes had been cleaned and prepared. On each girl’s bed were new clothes, stuffed toys, and personal items to replace those that had been lost. Several Chai Lifeline donors came forward with donations that allowed the girls and their counselors to take a trip to a local mall on Sunday to purchase new clothing.

Within minutes after Shabbos ended, the senior staff was on the phone with parents, assuring that all children and staff were safe. Parents breathed sighs of relief and commended the camp. “If this had to happen anywhere, I’m glad it happened at Camp Simcha, where you take such good care of our children,” one parent admitted.

“Camp Simcha is blessed with an extraordinary staff,” Rabbi Scholar admitted. “Our counselors and administrative staff were able to maintain the spirits of campers and to turn fear into comfort, confidence, and security. The fast action, beginning with the counselor who smelled smoke and knew just what to do, and continuing with the careful attention to the physical health and emotional well being of each camper, averted a tragedy.

“These children have gone through so much in their young lives. This is a setback for camp, but not for them.

“We will rebuild. Camp Simcha will be back next year and every year until pediatric illness is a thing of the past.”