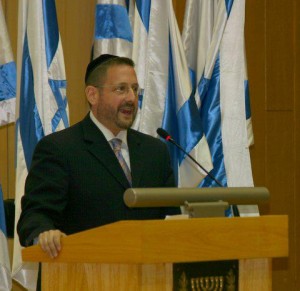 “A few days from now all Jews will experience Yom Kippur. While all of us commemorate this special day differently, there is one common denominator – praying to God for compassion – compassion on us as individuals, for our families, and for our nation and state. We ask Him to shower us its blessings and protect us from harm

“Quite shockingly, on Erev Yom Kippur, in a ritual aimed at achieving Divine mercy and atonement, many act in a cruel manner towards animals. Chickens are held in small cages without food or water, oftentimes in terrible heat. The chickens are then bound, swung above the heads of those seeking

“The time has come for a call to go out from the State of Israel putting an end to this practice. This call has already come out from Torah leaders in years past. The Rashba (Rabbi Shlomo ben Aderet, 13th century Spain) demanded that what he termed as a pagan ceremony be removed from his city and the Ramban, a contemporary of his, also came out against the practice. It is no wonder that the Code of Jewish Law (Shulchan Aruch) teaches that one should avoid this practice, coining it a “foolish practice.” The significance of these giants in our tradition demanding an end to this practice carries significant weight. The effort to stop the practice cannot be considered “anti-religious” or the like because it has the backing of such great religious figures

“And, the call is not to cease the custom entirely. The practice of using coins which one waves over his head and then gives to charity is well documented and provides an option for continuing the overall custom while not causing any unnecessary pain to animals. In modern times, Rav Kaduri asked that people use this option instead of harming chickens. The great Torah commentator Rashi (11th century France) teaches that an option exists to use flowers for this ritual. So even those who feel committed to tradition and seek to continue the custom of (cut off).

“The time has come for our State to take a stand against this practice. The High Holiday season reminds us about our mission to be a “light onto the nations.” Right before the climactic Neilah prayer on Yom Kippur we read the Book of Yonah which teaches about the responsibility of the Jewish people to inspire the world toward a belief in God and living morally and righteously. The prayers are replete with our hope that all of mankind embrace the civil code which Judaism introduced to the world. This must manifest itself in Israel leading the world in its care for the animal population and, thus, inspiring all humans to live according to this and other core values of ours

“I ask all readers to not use chickens this year when performing the kaparot ritual. It is time to do what is right. Use money. Use flowers. But don’t cause unnecessary pain to animals – especially not on the day before Yom Kippur. King David taught that God has compassion on all His creations. During this special time when we ask God for compassion and bless us with a wonderful new year, let’s demonstrate that we, too, live with this trait of compassion.”

Srugim asks: Rabbi, how is it permissible to make atonement with chickens when this is cruelty to animals? We wave the chicken around over our heads until it is dizzy, break bones, and then kill them. Why should the bird suffer because of my sins?

Rav Efrati: HKBH has commanded us to fulfill his mitzvos and this includes throwing the Se’ir La’azazel on Yom Kippur to break its bones and shatter the animal. This is part of the kapora ritual and the matter of cruelty to animals is pushed aside towards our atonement.

While here it is a minhag and not a mitzvah, one may certainly wave a chicken over one’s head gently, then slaughter it and give it to the poor. We don’t wave it until it gets dizzy and we are not breaking its bones. This is what those who hate Torah fabricate to mock the minhagim of our holy mothers and fathers.

The minhag of Kaporos is permitted and there is not an issue of cruelty to animals as some claim. However there is no obligation to make it more difficult for the chicken and one should wave it gently, not aggressively. There is a chessed by giving food to the poor. If only we could emulate the actions of our holy mothers and fathers. Those claiming otherwise are mocking the Rishonei France and Ashkenaz who were stringent to perform this. While the Rambam and Rashba opposed the minhag, as is ruled in Shulchan Aruch, this was permitted even back to the days of the Geonim. One performing Kaporos is in line with the Rema who states ‘אין לשנות כי הוא מנהג ותיקין’.

A legitimate concern is the shochet operating under such conditions and pressure and this is why the Chayei Adom preferred money in performance of Kaporos. However if the shochet is of proper mind and abilities, there is no reason not to perform Kaporos with a chicken.

In conclusion, one may perform the mitzvah with money or a chicken but one may not mock the mitzvah and one may not introduce issues of cruelty to animals for it is not relevant.