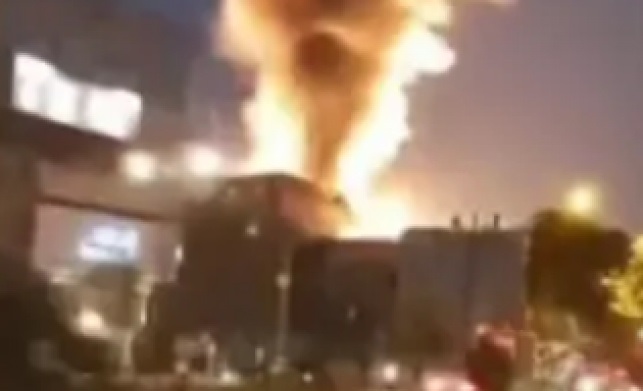 A large explosion reportedly occurred in a factory south of Tehran early Tuesday morning, the latest in a series of mysterious blasts in Iran over the past week.

Iranian news reports said that two people were killed and three were injured at the explosion in the Sepahan Bresh factory in the city of Baqershahr in the Kahrizak district.

The Kahrizak district governor told media outlets that the blast occurred at an oxygen tanks factory and the explosion was caused by “negligence in filling oxygen tanks,” adding that the large explosion also caused damage to an adjacent car parts factory.

The loud explosion reportedly shook the city, frightening the residents. Emergency forces rushed to the scene.

Monday’s blast follows an explosion at a power plant in the city of Ahvaz on Saturday as well a chlorine gas leak at a petrochemical center in southeast Iran later in the day.

Last week, an explosion caused extensive damage to the Natanz nuclear facility, and the week before that, an explosion occurred at the Parchin military complex in Tehran.

A New York Times article on Sunday said that Israel is responsible for the fire in Iran that caused significant damage at the Natanz nuclear site, quoting an anonymous Middle Eastern intelligence official.

The intelligence official, who said that the blast at the site was caused by a powerful bomb, added that Israel was not responsible for the other mysterious blasts in Iran last week.

Iran admitted on Sunday that the fire caused considerable damage at the Natanz nuclear site. Behrouz Kamalvandi, a spokesperson for Iran’s atomic agency, confirmed that the site was a new centrifuge assembly center,

Kamalvandi added that the blast may temporarily slow down the development of the centrifuges but said that the damaged building will be replaced with a more advanced facility.