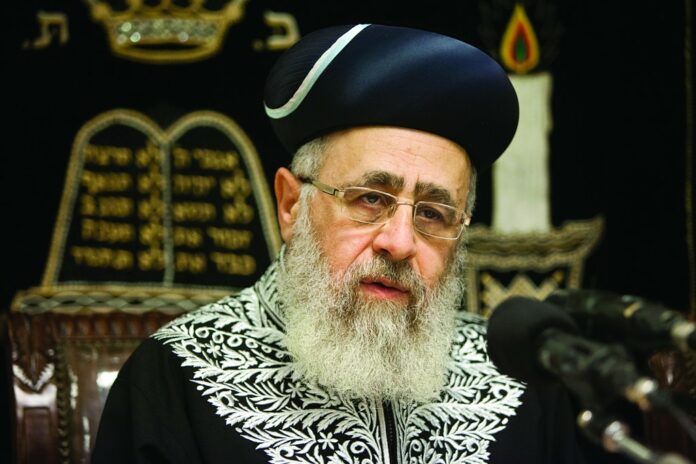 The following ruling was issued by the Chief Rabbi of Israel, Rav Yitzchok Yosef, shlita in regard to Yom Kippur and davening and fasting. It is a guide for shuls and individuals. It was translated by Rabbi Yair Hoffman. Rabbi Yoseph shlita, enjoys a reputation similar to that of his father Rav Ovadiah Yosef zt”l, and his seforim are recognized throughout the world as masterpieces of halacha. These rulings were shown to many leading Poskim in America, who stand behind them as well. The ruling is followed by guidelines for the amounts and the timing written by Rabbi Hoffman that were carefully reviewed by Rav Yisroel Belsky zt”l.

Rav Yosef’s ruling was issued on Wednesday, 5 Tishrei 5781. He writes as follows:

Firstly, I wish to make it clear:

Our Torah is the Torah of life, and commands us with the words “VeNishmartem me’od lenafshosaichem – and you shall be very careful with your lives,” and the Torah also said, “vechai bahem – and you shall live by them.”  Our sages in the Talmud in Yuma 85b darshened – To live by them and not die by them. Therefore, Pikuach Nefesh sets aside the entire Torah.  A sick person who is dangerously ill eats on Yom Kippur. We violate the Shabbos [for such a person], even on a doubt in this regard.   It is as the Rambam has written (Hilchos Shabbos 2:3):  “And it is forbidden to delay in the desecration of Shabbos for a sick person who is in danger as it states “that a person does and he shall by them” and not die by them.

The Baalei Tosfos have already written (Bava Kamma 23a) “A person should be more careful to not harm others than to not harm himself”, and certainly in the general prohibition against harming his friend, there is also the duty to prevent a situation that could infect his friend with the disease, chas v’shalom.

The great Gaon, Rabbi Akiva Eiger zt”l had circulated a ruling at a time when the Cholera epidemic was raging in Europe and wrote there: ‘I have already warned many times, warning after warning, that they must conduct themselves in said manner … as they arranged, and that the doctors had decided … and no one should violate their words.”

THE LAWS OF PRAYER

And we pray to the Creator of the world that He send a complete recovery to all those who are ill, and that he stop this pandemic and this destruction from upon us and all of Israel and on all of the world.  Let us hear good tidings, salvations and consolations.  Let us be written and signed in the Book of Life and of Peace.  May our prayers be graciously answered with a complete redemption quickly, Amain.

Up until here is the ruling from Rav Yitzchok Yosef.

It is important to know that the Torah does not want us to endanger ourselves by being overly stringent in matters of fasting. If it is determined that a patient must not fast – then it is a Mitzvah, in fact, to eat. Indeed, there is a very serious punishment that is exacted upon people who refuse to eat when it is medically mandated (See MB 618:5).

Experience, however, tells us that when people get very ill or very old, they often do not think logically when it comes to their own health.

It is often excruciatingly painful for old and sick people to eat – even though they must.

As a consequence, they will often use their lifelong strict adherence to halacha as an excuse not to eat even when instructed to do so.

How should family members deal with this?

They should patiently and lovingly say that their Mitzvah now is to eat, just like there is a Mitzvah to eat on Erev Yom Kippur. Often the best manner to approach it is to divert their attention with other matters or questions when one feeds them. Sometimes switching the feeder, or laying guilt trips can work too. [This is all referring to situations when there is no feeding tube or parental-nutrition-port.]

Of course there are other situations where a generally healthy person may have recently just taken ill too. It is therefore important to be familiar with the definitions and parameters found below.

There are actually two different prohibitions that are violated when a regular person eats on Yom Kippur. The less commonly known prohibition is called “below the threshold prohibition” or the “Chatzi shiur prohibition.” Although this prohibition is a Torah one, it does not invoke the serious punishment of Karais. It is also set aside whenever there is anyone who is dangerously ill.

But what about the regular “above-the-food-threshold” prohibition? May a dangerously ill person violate this regular prohibition if he can be eating “below the threshold?” Although this issue is actually a debate , the consensus of opinion is that if it is completely feasible from a medical perspective, such a person should just eat and drink “below the threshold.”

The food measurement is a constant –two thirds of a medium egg (see SA OC 618:7) – understood as one fluid ounce. The liquid measure varies according to each person. If it is determined that the patient should be fasting on Yom Kippur, then if feasible, the maximum quantity of food that may be eaten at one eating session is one fluid ounce – or 30 milliliters (ccs). It is a good idea to prepare these amounts in schnapps cups in advance. Proteins are of course more filling than starches.

What is considered an eating or drinking session? Ideally, one should try to space them every nine minutes. The view of Rav Chaim Na-eh for food is 8 minutes (See Shiurei Torah 3:15). Rav Moshe Feinstein zt”l writes (Igros Moshe OC IV #41) that b’dieved – in a case of need, they should have a gap of 4 minutes between them. In regard to liquids one should shoot for a nine minute gap, but if not a four minute gap. If this is not possible, then, for liquids, one should try to fulfill the view of the Chasam Sofer (Responsa Volume VI #23) of a gap of at least two minutes. The timing is based on the concept of the eating of a Pras – four eggs. The Mishna Brurah writes 618:20 that the shiur for this is nine minutes. These are the main views.

As discussed earlier, it is this author’s opinion that the material under discussion should be more widespread and made more available to others. Whenever there is a doubt as to whether one is dangerously ill and there is no doctor or knowledgeable Rabbi that is present or available, one should , of course, feed the patient. We should all know the one ounce food figure and then a nine minute gap formula and the four minute gap if this is not possible. It may also be worthwhile to have pre-filled one ounce food containers available for emergency situations too.

May Hashem, the Healer of all illness, grant us all a year of health, parnasah and nachas from our families and ourselves.

What follows is the original Hebrew of Rav Yitzchok Yosef’s ruling: