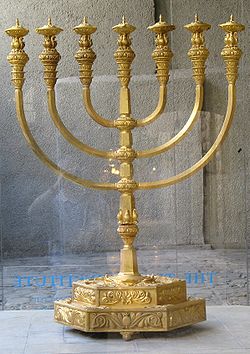 We say it in every single Shmoneh Esreh of all eight days of Chanukah. We say it in Al HaNissim.  But what is it that we are actually saying?

Thereafter, Your children came to the Holy of Holies of Your House; cleansed Your Temple, Purified the site of Your Holiness and kindled lights in the COURTYARDS of Your Sanctuary.

But wasn’t the Menorah in the Heichal itself?  What is going on over here?  Why does it say “Courtyard?”

Perhaps it just means within the spaces of and chatzer can mean that in Talmudic terminology.  In fact, if we look at the RaDaK on Tehillim 116 – that is how he seems to understand the words.

On the other hand, there can be another possibility.  Perhaps the Chashmonayim were so excited as to the Divine Miracle of the battle – the giborim b’yad chalashim – the strong being handed over to the weak – the Temple restored to Torah hands –  that they decided to publicize it massively.  Perhaps, they actually moved the menorah outside into the Chatzer!

If this is the case, then we have a source for the very first Pirsumei Nissah of Chanukah – not the next year in a get together of Chazal with an official kvius, but the very first opportunity of the very first Chanukah!

The Chasam Sofer in his drashos on Chanukah p. 67 actually understands bechatros kodshecha in this second manner – that they did light the Menorah outside.

He quotes a Rambam in Bias HaMikdash (9:7) that the Hadlakah of the menorah itself is permitted by non-kohanim if it was prepared by the Kohanim and if the Kohanim took it outside.  According to the Gemorah in Menachos 28b – the Menorah was three amos high – so it could have been moved.

So, in essence, we have here a full-fledged machlokes – between the RaDaK (a Rishon who was born 100 years after Rashi) and the Chasam Sofer. It gets a bit more interesting too.  The Minchas Chinuch in Mitzvah 98:9 seems to question the aforementioned Rambam – and states that since we rule hadlakah oseh Mitzvah – it has to stay in its proper place.  Rav Chaim Soloveitchik zt”l has a different take on it and holds that the Menorah of the Beis HaMikdash has a different set of halachos altogether in this regard.

Another thought:  Perhaps the Chashmonayim felt that they simply couldn’t light it in the Heichal because it was filled with all sorts of Avodah Zarah statues as the Shalmei Todah points out in SIman gimel.  They needed time to destroy those statues, and probably clean it out.  So it could be that even if we assume that the Minchas Chinuch’s approach is the way that the Chashmonayim went – maybe they made an exception here because of ais laasos lashem – undo your Torah.

The Chasam Sofer even suggests that this could be another answer to the Bais Yoseph’s question about why they celebrated eight days – when they did have a flask of oil that would last one day.  He answers that one would need more oil when lighting outside – then when lighting indoors.

If anyone has more thoughts or information please contact the author below.