The Lufthansa LH690 rescue flight for Israelis stranded abroad took off on Tuesday evening with only half of the 160 passengers who were slated to board the plane, stranding 80 Israelis in the Frankfurt airport, mainly Chareidim, including a young avraich from Belgium whose family was waiting for him in Israel to begin his mother’s levaya.

The flight, which had been approved by the Israeli government, was scheduled to leave at 6:55 p.m. on Tuesday evening but due to a delay caused by bureaucratic difficulties and a lack of clarity on the part of Lufthansa staff of the documents the Israelis were required to present, boarding only opened 40 minutes before the scheduled takeoff time.

The plane then took off after only half of the passengers were aboard, reportedly due to Israeli pressure for the plane to take off on time and/or a lack of enough Lufthansa staff members to process all the necessary paperwork.

Eighty Israelis, mainly Chareidim, were stranded at the airport, including a large group of schochtim and mashgichim who were returning from South America.

Sadly, another Israeli who was left at the airport was an avreich from Belgium whose mother in Ashdod passed away on Tuesday morning at the age of 43 after a prolonged illness. The family was waiting for him to arrive before beginning the levaya. Sadly, when they heard he didn’t make it on the plane, they had no choice but to hold the levaya without him. The son was left to bemoan his loss, sitting on the floor of the airport.

The stranded Israelis slept at the airport overnight, with pictures on social media showing the passengers sleeping on the floor and benches. Passengers tried to secure a seat on other rescue flights but there were no seats available for another week. One passenger, a Chabad chassid from Mexico, gave up and booked a flight back to Mexico.

Meanwhile, Chabad shlichim in Frankfurt came to the rescue, and a team of shluchim, led by Rav Moshe Mendleson, brought kosher food for all the passengers. 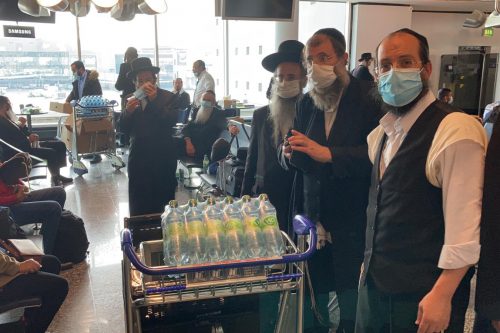 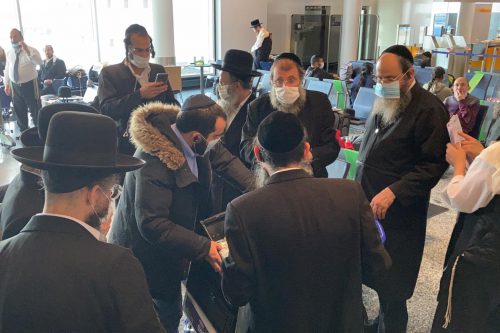 Fortunately, later on Wednesday, Transportation Minister Miri Regev ordered that approval be granted for a special flight to bring the Israelis in the airport back to Israel.