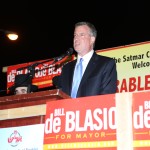 In a first radio interview on a Jewish program in the general election for mayor, Democratic mayoral candidate Bill de Blasio promised to have an open door in City Hall for the Orthodox Jewish community he maintains a close relationship with.

Appearing on ‘Community Matters’ radio program hosted by a long friend Leon Goldenberg, Mr. de Blasio was asked to address the issue of the Hasidic/Orthodox Jewish community not always being recipients of the same tolerance that’s demanded of other groups and minorities. “Orthodox Jews have a feeling of live and let live. There’s a feeling that we are outsiders,” said radio host Leon Goldenberg.

“I have seen the bias. There’s no question that sometimes in the mainstream media, you’ve seen people misunderstand the community and not respect,” Mr. de Blasio responded. “In my experience, I am aware of the fact that there’s some real bias out there. It is not acceptable to me.

“And I have to say on top of that, the Jewish community has given a lot to New york City,” Mr. de Blasio added. “This is a community that is extraordinary charitable.” He also mentioned organizations – such as Hatzolah and Shomrim and other services that the community provides – who reduce the burden off the public sector, that people should be thankful for.

“As mayor it would be my business to make sure that City Hall is open and responsive to the Jewish community,” Mr. de Blasio promised. “And I think, based on the personal relationships that I have alone, and the history I have representing the community, that’s going to be a very natural thing – to change the relationship and make sure the community feels fully included.”

Listen to audio of the full interview: