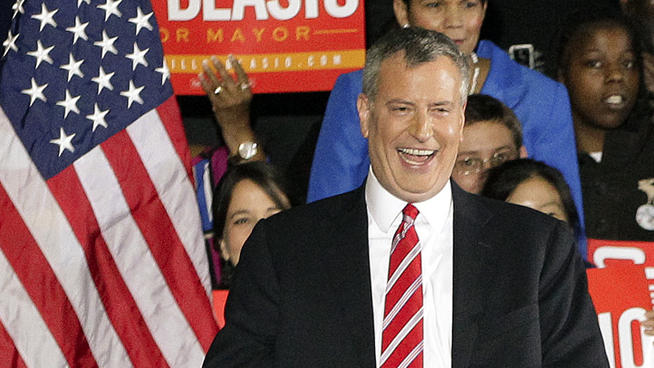 Bill de Blasio can add another supporting group to his column. Mayor-Elect de Blasio is the first Democrat to win the Jewish vote since Ed Koch won his reelection bid in 1985. It wasn’t an overwhelming outburst of support, considering his 49 point margin against Republican Joe Lhota. Nonetheless, he still bested Mr. Lhota among Jewish voters by 53-44 percent, according to exit polling by Edison Research for The New York Times.

Mr. de Blasio’s share of the vote represents an increase of 29 points over the 2009 share garnered by Bill Thompson, when he ran against incumbent Mike Bloomberg, an independent/Republican who won 75 percent. Democrat Fernando Ferrer got an estimated 26 percent against Bloomberg in 2005, while Mark Green – in a Jew vs. Jew contest – won about 48 percent of the Jewish vote in 2001.

In the NY Times definition of Borough Park – the largest gathering of Orthodox Jewish voters – Mr. Lhota edged out Mr. de Blasio by 3 points (49-46), the smallest margin of victory for a Republican candidate in the past two decades. Mr. de Blasio also swept Williamsburg where he earned the early support of the Ahronim and a late-insignificant endorsement by the Zalis in the last stretch of the campaign.

Among the significant Orthodox Jewish areas where Lhota support was strongest were Manhattan Beach, Brighton Beach and Midwood in Brooklyn, Far Rockaway and Kew Gardens Hills in Queens, Staten Island and the Upper East Side of Manhattan. According to Crown Height Info, the Crown Heights Jewish community “was a tiny island of support for Republican Joe Lhota amid a sea of Democrat Bill de Blasio voters for miles all around.”

But overall, Bill de Blasio did pretty well among all factions within the Jewish Community.

The number crunching will continue over the next few days, and we will, as always, bring you the factual final numbers as it pertains to the Jewish community’s vote.

Bill de Blasio ai’t Jewish, but considering the mandate given he can definitely earn the title given to others -in different circumstances – The King of the Jews in New York City.