Jerusalem Mayor Moshe Lion dedicated a neighborhood square to the memory of Chiune Sugihara, the Japanese diplomat who saved thousands of Jews from the clutches of the Nazis, including the hanhala and entire student body of Yeshivas Mir.

Chiune’s son, Nobuki Sugihara, 72, who lives in Belgium, traveled to Israel to participate in the event in the Ir Ganim neighborhood of Israel’s capital city. Addressing the crowd, he said that his father never imagined that so many recipients of the visas he issued would survive, estimating that there are now several hundred thousand descendants of the visa recipients.

Nobuki said that when his father was asked why he helped the Jews, he responded that he had pity on them because “they had nowhere else to go, they had no home.”

“This is the most emotional ceremony that I’ve ever participated in,” said Mayor Lion. “It’s a reminder that it’s never possible to know the results of our deeds in the future. In the merit of one man, the chassid umos ha’olam, Chiune Sugihara, Jerusalem merited to boast Yeshivas Mir, which will soon mark the tenth yahrtzeit of the beloved Rosh Yeshivah HaGaon HaRav Nosson Tzvi Finkel, z’tl. Sugihara did everything in his power and worked tirelessly to save Jews from the clutches of the Nazis, actions that cost him a not-so-simple personal price. The least that the city of Jerusalem can do for Sugihara is to commemorate his name as a sign of appreciation for his noble deeds.”

“We love you,” Lion said to Nobuki and four other family members who had traveled to Israel for the ceremony. “We will always appreciate what you did.” 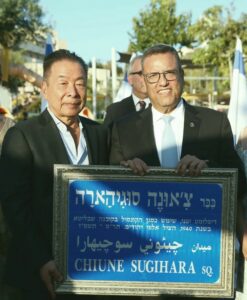 The event, which took place in the Ir Ganim neighborhood of Jerusalem and was attended by the Japanese Ambassador to Israel Koji Tomita, other public figures, and Holocaust survivors, was aired on Japanese television channels. 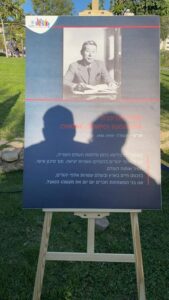 Chiune Sugihara was serving as the Japanese vice-consul in Kovno, Lithuania in 1940, when thousands of Jews in the city were desperately trying to flee the Nazis, most of them refugees who had fled Nazi-occupied Poland.

Sugihara issued between 2,100 to 3,500 transit visas to Jewish families and individuals, which ultimately saved up to 10,000 Jews from near-certain deaths by enabling them to escape Europe through the Soviet Union to Japan and other countries. As is well-known, the survivors included the Rabbanim and 300 talmidim of Yeshivas Mir who spent the war years in Shanghai and re-established Yeshivas Mir in Brooklyn after the war. (Rav Eliezer Yehuda Finkel, z’tl, opened a branch of Yeshivas Mir in Jerusalem in 1944). Those whose lives were saved by Sugihara’s transit visas included the Rosh Yeshivah, HaGaon HaRav Chaim Shmuelevitch, HaMashgiach HaGaon HaRav Yechezkel Levenstein, HaGaon HaRav Yechiel Michel Feinstein, and other Rabbanim who went on to be marbitz Torah in the US, Eretz Yisrael, and other locations.

Sugihara issued the visas despite the fact that he was warned by his superiors in Tokyo not to issue any visas without due process. He ignored them and continued to issue the visas even at the railway station as he was leaving the country (as all foreign diplomats were told to leave Lithuania after it was annexed to the Soviet Union in the summer of 1940).

In 1946, Sugihara was dismissed from the Japanese Foreign Service as a result of ignoring his superiors’ instructions while in Kovno and was forced to earn a living through odd jobs until the end of his life.

On October 4, 1984, Yad Vashem recognized Chiune-Sempo Sugihara as Righteous Among the Nations. In 1986, Sugihara passed away at the age of 86.

The Yad Vashem website quotes a vivid description of the Jews’ desperate plight in Kovno of 1940 and the dilemma endured by Sugihara and his wife when they received orders from Tokyo not to issue visas for them, described by Sugihara’s wife, Yukiko, over 50 years later.

“At the beginning, there were about 200 maybe 300 people,” she said. “They stood there from morning till night, waiting for an answer. They also stood like this the following day and the day after. They stood all the time. And their small children together with them. People who had escaped from Poland, a place dangerous for them, and together with their children walking day and night, reached Kaunas and the Japanese Consulate asking for visas. They had risked their lives in order to reach this place, their bodies exhausted, their clothes torn and their faces tired. I would see them from my window, when they saw me looking at them, they would put their hands together (as if praying). It was so hard for me to watch these scenes… they were so miserable.”

“Two days passed, and my husband sent another telegram, for the third time. The answer was the same answer, no matter how many telegrams: do not issue visas. We did not know what to do….We could not sleep at night. We kept thinking and thinking what to do. In addition to that, I had a baby, we had three young children. If my husband issues the visas contrary to the Foreign Office instructions, then when we return to Japan, my husband would for sure lose his job … We were thinking and thinking what to do, and the representatives of the refugees begged and begged ”please give us the visas.”