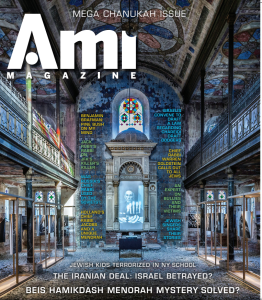 The interim deal announced this past Motzei Shabbos between the P5+1 countries and Iran, which releases some frozen Iranian assets in exchange for concessions by Iran on its nuclear program over the next six months, has alarmed Iran watchers around the world, and especially in Israel. Obama’s push for a compromise, revealed this week to have started before any so-called “liberalization” on the part of Iranian government, may turn out to be disastrous.

One question has been whether Congress will attempt to circumvent Obama’s negotiations by passing new sanctions during the interim period. Nick Muzin, director of coalitions for House Republicans, gave indication in an interview with Ami Magazine this week of how he sees the sentiment in Congress.
“The Republicans in the House are committed to keeping the pressure on Iran by imposing even more crippling sanctions.  This sends a message to Israel that we stand shoulder to shoulder with them,” Muzin said. See this week’s Ami Magazine for comprehensive coverage of the deal with Iran and in-depth analysis and reaction to what may be Obama’s most dangerous act yet.
(AMI Newsroom)