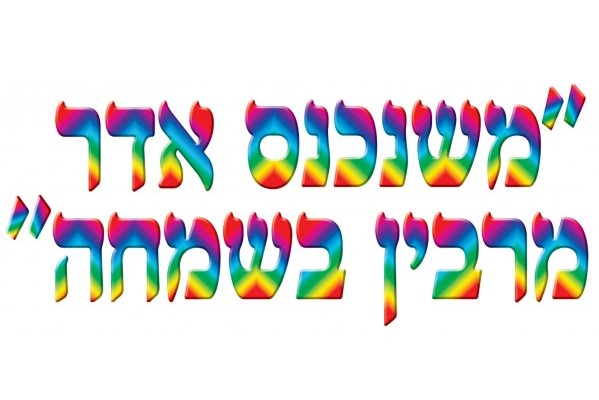 Years ago, in the late forties or early fifties, there was Rav, a talmid of Rav Yerucham Levovitz, who appeared on a game show with two other imposter Rabbis.  The non-Jewish celebrities on the game show had to determine who the real Rav was of the three candidates by asking a series of questions.   At the end of the show the host announced, “Will the true Rabbi please stand up?” I met the Rav many years later in the Mirrer Minyan in Boro Park.

Being that Rosh Chodesh Adar Rishon is coming up, we may also pose the same question – which is the true Adar – Adar Rishon or Adar Sheini?

There are four pieces of background information that we need to know:

And so we have every 7 out of 19 years – two Adars.  But which one is the real or true one?  There are many ramifications to this question of which is the true Adar.

THE REASON FOR THE EXTRA ADAR

The reason for the extra Adar is that there is a special Mitzvah in the Torah to ensure that the holiday of Pesach fall out in the spring.  This is primarily on account of the verse in Dvarim (16:1), “Shamor es chodesh haAviv   – guard the month of the spring” (See Sanhedrin 11b).   The Korban Omer which consists of barley is brought on the day after Pesach.  If Pesach comes out early, however, The barley will not be available since it has not yet ripened.

There seem to be a number of explanations as to why it was Adar that was chosen.  Rashi in Rosh Hashana (7a) identifies this month with the verse’s ‘chodesh haAviv’ – as opposed to Nissan.  The Baalei Tosfos in Sanhedrin (12a) explain that the pasuk in Megillas Esther itself (3:7), identify Adar as the twelfth month of the year – so it must be the one that plays both roles.

The Baalei Tosfos in Rosh Hashanah (19b) conclude that the true Adar is the second one not the first.  The first Adar is the extra one.  This is also the opinion of the Rambam in Hilchos Nedarim (1:6).  It seems that this is the general halacha

THE ISSUE OF WHICH IS THE “ADAR REFERRED”

There is a related issue that may be synonymous with the True Adar and may be an entirely different issue than the “true Adar.”  That issue is which is the “Adar Referred.”  In other words if someone just says Adar – does it refer to the first Adar or the second one?

It seems that the aforementioned Tosfos hold that both issues are one and the same.

YAHRTZEITS – THE RULING OF THE SHULCHAN ARUCH VS. THE RAMAH

the Shulchan Aruch (OC 568:7) rules that the yahrtzeits are to be observed on the second Adar.  The second one is thus considered to be the true Adar.  However, for “Adar Referred” he rules that it is the first Adar.  [See CM 43:28 and EH 126:7].  So for a lease or a divorce document, just plain Adar refers to the first Adar.  A get would be pasul if the intent was for the second Adar and one did not write Adar Sheini according to poskim.

The Ramah (568:7), however, has a more nuanced view.  He adds the following words: “Some are of the opinion that one should fast in the first (Adar of the leap year) unless the death was in the second Adar, where one would fast on the second Adar. The custom is to fast in the first Adar. However, some are stringent and do fast in both Adars.”   The Mishna Brurah (568:42) explains that although it is proper to fast on the second as well – he does not push off other mourners on this account.

In Yoreh Deah (402:2), the Ramah once again adds that the main custom is to fast in the first Adar.  We will see, however, that the Ramah’s position on Bar Mitzvahs seems to be vastly different from his position on Yahrtzeits.

The issue of when to hold a Bar Mitzvah can be sub-divided into different categories:

If the child was born in leap year 6, 14, or 17 of the cycle – then his Bar Mitzvah will also be during a leap year.  There is a debate between the Mogain Avrohom and the Mishna Brurah regarding whether an Adar Rishon kid becomes bar Mitzvahed in the 1st Adar or the second.  The MA holds that he must wait until the 2nd because a full 13 years haven’t passed!

REGULAR YEAR BIRTHS BUT BAR MITZVAH IS ON A LEAP YEAR

It would seem from all of the above that the simcha that occurs at the arrival of Adar is for the second Adar – not the first.

We can understand the Ramah’s position on Yahrtzeits because the fast is based on twelve months after the passing of the deceased and not predicated upon the year (see responsum of Mahari Mintz #9 cited in the Ramah.)  The Trumas haDeshen (#294 also cited in the Ramah) invokes the notion we mentioned earlier that it is based upon “Adar Referred” and it acts as a Neder.

YAHRTZEIT ON A 30TH OF ADAR RISHON

During a non-leap year, Adar is only a 29 day month.  When is a yahrtzeit observed when the death occurred on the 30th during a leap year?  The Machatzis Hashekel rules that it should be observed on the first of Nissan, arguing with the Mogain Avrohom who holds that it should be observed on the previous 29th. Rav Moshe Feinstein zt”l (Igros Moshe, OC III #159) rules in accordance with the Machatzis HaShekel.