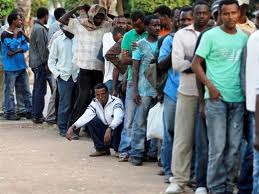 About 150 illegal African nationals who infiltrated into Israel on Tuesday morning 14 Teves 5774 boarded buses at Latrun and headed to the capital. They held a protest outside the Prime Minister’s Office, demanding asylum. They began in Beersheva on foot on Monday morning 13 Teves.

Israel’s political left continues to decry the lack of government assistance given to the large population of illegals, many having taken up residence in southern Tel Aviv. on the other side are the many who feel Israel should expel them back to their countries of origin, citing how they have turned southern Tel Aviv into a crime ridden area and they have done nothing but carry out violent crimes against innocent citizens and steal away jobs from taxpaying citizens.

Speaking to Kol Chai Radio on Tuesday morning former Interior Minister Eli Yishai explained he did his best to block them from entering and now favors expelling them. He warns that permitting this large population to remain in Israel will be costly in many ways and pose yet another danger to the waning Jewish character of the state.