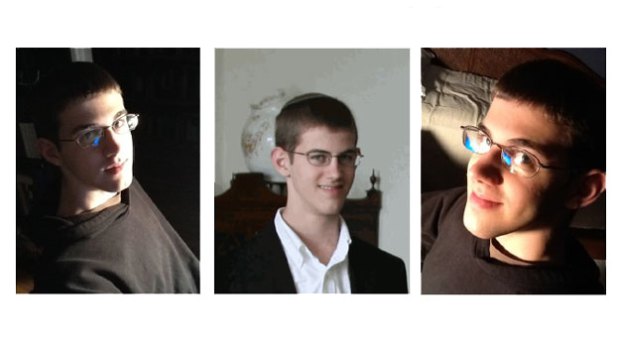 Update 4: 38pm EST: While the search continues for missing Caleb, Maimonides students have been doing everything they can to help locate missing Caleb. The lunch room at the school has become an all out search center and students have been actively using social media outlets to gather and spread  information about Caleb. Still no new information has been received about his whereabouts.

Update 4:08pm EST: ABC6 in Providence reported Wednesday afternoon that there have been “several reports” placing the teen in Providence on Tuesday evening. No further details were reported.

Update: 2:05pm EST: Over 200 People have gathered in attempt to find Caleb yet still no progress in locating him. MassLive.com reports a statement from Maimonides Head of School Nancy Katz. Katz’s: “Caleb Jacoby, an 11th grade student at Maimonides School, has been missing from home since Monday. To help Caleb’s family and the authorities in their search to find Caleb, the school is coordinating a search effort involving over 200 volunteers in the metro Boston area. The school will continue to engage all of its resources to aid Caleb’s parents and the Brookline Police. Our entire school community is praying for Caleb’s safe return and we are deeply appreciative of the outpouring of support. Anyone with information should contact the Brookline police at 617-730-2222.”

The Brookline police say Jacoby was last seen wearing navy chino pants or jeans, a navy polo shirt, a brown winter jacket with a hood, brown shoes or sneakers and white socks. He frequents public libraries and Young Israel of Brookline on Green Street. He is described as having a thin build and short, light brown hair. He is 5-foot-11 and weighs 140 pounds.

Update 11:48am EST: Maimonides School posted an update on their Facebook Wall: Maimonides School is conducting a community-wide search for 11th grader Caleb Jacoby. All those 18 years and older who would like to participate are welcome. The next search group will be departing from Saval Campus today at 12:00 noon.

Update 10:38am EST: Masslive.com reports:  Brookline Police Captain Thomas Keaveney said Wednesday morning that the police had no reason to believe there was any foul play. “We’re leaning more toward a runaway, but we can’t be sure,” Keaveney said. Keaveney said the police were continuing to search for him. ‘Some of the volunteers at the search knew the family; others were simply part of the local Jewish community. “He’s a good boy. He’s not just a boy that would run away from home,” said Yishai Admanit, who knows the Jacoby family from the Young Israel of Brookline, a local synagogue. “It’s not a reasonable option.”

Update 09:30am EST: There has been an outpouring of support on social media outlets to assist in finding the whereabouts of Caleb Jacoby yet the investigation was ongoing as of early Wednesday morning, according to a spokesman for the Brookline Police Department. “It’s still active; no changes at all,” he said.  The teenager vanished during a bitterly cold stretch of weather on the East Coast. The current temperature in the Boston area in 7F.  A prayer vigil for Jacoby will be held at Young Israel of Brookline, a synagogue at 62 Green St. Anyone who sees Jacoby is asked to contact the Brookline police at (617) 730-2222. 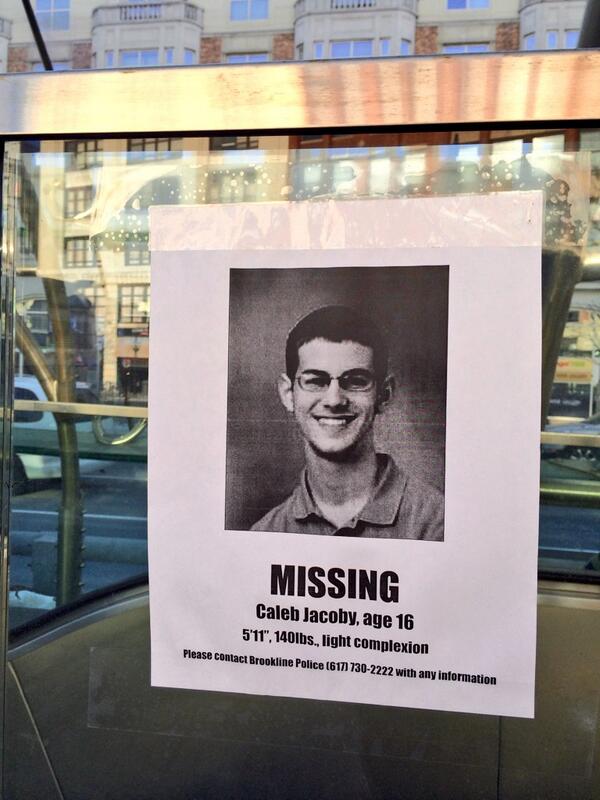 Jeff Jacoby, leading columnist for the Boston globe and father of the missing teen,  took to twitter to thank everyone who is assisting the search for missing Caleb.

We are so deeply, deeply grateful for everything being done to reunite us with our beloved son Caleb. pic.twitter.com/o7wHTr0BrA

01/07/14:  08:55pm: The Brookline police say Jacoby was last seen wearing navy chino pants or jeans, a navy polo shirt, a brown winter jacket with a hood, brown shoes or sneakers and white socks. He frequents public libraries and Young Israel of Brookline on Green Street. He is described as having a thin build and short, light brown hair. He is 5-foot-11 and weighs 140 pounds.

״The school is engaging all of its resources to aid Caleb’s parents and the Brookline Police,” Ellen Pulda, a spokesman for Maimonides School, said. “Our entire school community is praying for Caleb’s safe return.”

Efrat Lipschitz, Jacoby’s Hebrew teacher, who is organizing efforts to post fliers, told Mass Live Jacoby was last seen midday Monday. “We don’t know anything. We don’t have even a clue,” Lipschitz said.

Lipschitz described Jacoby as a quiet boy and a serious one: “He took his studies very seriously. He took life seriously. He wasn’t easygoing. He’s a very quiet boy, he’s also a very good one. People really love him in school because he is a very good person.

Caleb Jacoby, Calev Avraham ben Elisheva Rut, 16, an 11th grader at the Maimonides School, has not been heard from since around 12:30 p.m. yesterday.

Caleb Jacoby left his home yesterday at about 12:30pm. No one has heard or received electronic communication from him since that time.

He is the son of Globe columnist Jeff Jacoby.

Detectives from the Brookline, MA PD are actively engaged in searching for him. Police urge anybody with information about his whereabouts to contact them at 617-730-2222. 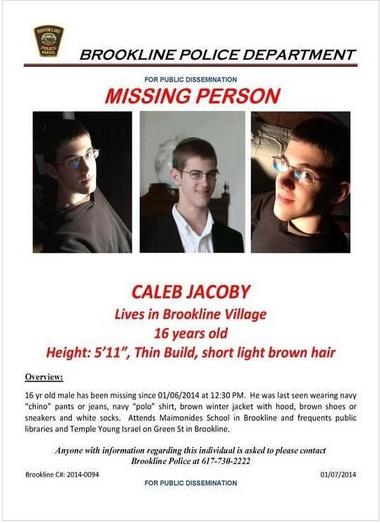