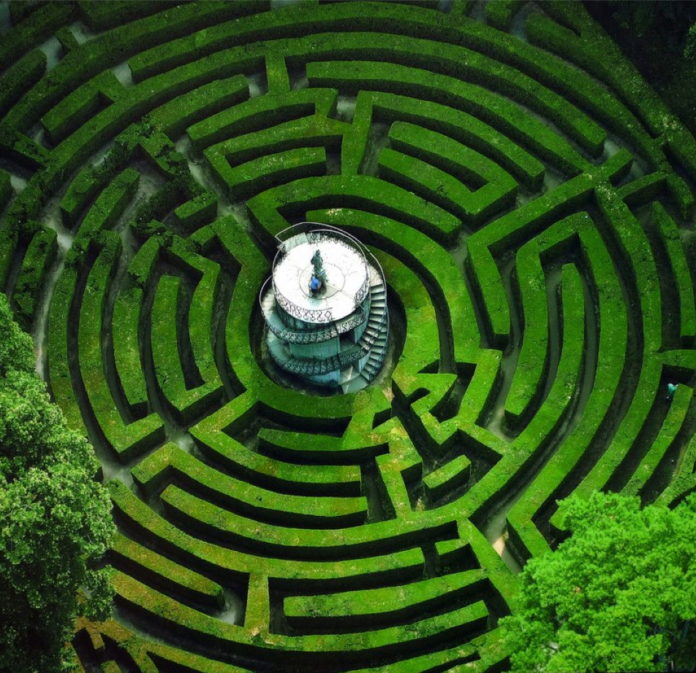 Most people would be shocked to know that there is a labyrinth maze garden that made its way into one of the most classical Mussar Seforim in the world – The Mesilas Yesharim of  Rav Moshe Chaim Luzzato (1707-1746).

It is located between Venice and Padua, and it is described as one of the most beautiful maze gardens in the world.

THE AUTHOR WRITES A WEEKLY PARSHA SHEET ON THE TOPIC OF EMES.  To SUBSCRIBE AT NO CHARGE – PLEASE SEND AN EMAIL TO [email protected]

It is called the Villa Pisani in San Pietro di Stra. The villa and garden labyrinth was built on the banks of the Brenta River, by the rich and powerful Pisani family in 1722, while Rav Luzzato was still living in Padua and when he was 15 years old.

It has nine concentric circles that are formed by 900 boxwood hedges.  There is a tower in the center with a double helical external staircase. But let’s get to the Dvar Torah first.

The Gemorah in Bava Basra 78b provides the following interpretation to this pasuk:

One of the greatest challenges that a person must overcome in life is self-deception.  Self-deception is a lie or a rationalization that we come up with in order to justify our own faulty position, flawed thought process, or incorrect action that we embark upon.   Were it not for our biases, desires or laziness, we would know deep inside that these thoughts or actions are wrong.

The author of the Mesilas Yesharim (chapter 3) explains:

This true counsel could not have been given nor could its truth have been seen except for by those who had already escaped from the hands of their evil inclination and ruled over it. For one who is still held captive in the prison of his evil inclination – does not see truth. He is incapable of recognizing it. For the evil inclination literally blinds his eyes. He is like one walking in darkness, with stumbling blocks before him and his eyes don’t see a thing..

Darkness of night causes us to err in two ways. (1) it covers our eyes so that we cannot see what is before us. (2) It causes a pillar to appear as a man or a man to appear as a pillar.

Exploring this second error, darkness distorts our sight until we see evil as good, and good as evil.  This is capable of carrying us to the abyss of destruction.  Our self-deception can cause us to rationalize that which we are blinded to – with the misapplication of leniencies.

Thankfully, there is, however, a three-fold resolution to this: 1] We must commit to employing every-day emes in our lives.  2] We must make every effort possible to ask a shailah as to what is the true path according to the Torah. To whom do we direct these shailos?  We ask our Poskim – to those who rule over their evil inclination and who clearly see all the pathways before their eyes – they can counsel those who are willing to listen. It is these people that we must trust.  3] We must set aside times to study the fundamental principles of emes so that we can realize what is self-deception, and what is truth.  Shlomo HaMelech describes this third point in Mishlei (4:26), “Weigh the path of your feet, and all your ways will be established.”  Yirmiyahu HaNavi (Aicha 3:40) describes it as well, “Let us search and examine our ways, and we will return to G-d.”

In the middle of the third chapter, the Mesils Yesharim compares it to a garden maze.

To what is this analogous? To a labyrinth. This is a garden planted for amusement, commonly known to the noblemen. The hedges of plants are arranged into many intricate walls, among them many confusing and interlacing pathways, all of which appear similar.

The goal is to reach the lookout tower in the midst of the maze. But among these pathways some of them truly lead one to the tower while others deceive him, leading him to stray away from it.

One who walks between the paths is not at all capable of seeing or knowing if he is walking along a correct path or a deceptive one. For each one appears similar, there is no noticeable difference whatsoever to the eye beholding them. He will not reach the tower unless he knows the correct path through prior experience and visual familiarity by having entered it before and successfully reached the goal, namely, the tower.

One standing on the lookout tower, on the other hand, can see all of the pathways before him and discern between the true and false ones. He is in a position to warn those walking in them and tell them: “this is the path to take!”.

So too here, one who still has not ruled over his evil inclination is lost in the midst of the “pathways” and cannot distinguish between them. But those who rule over their evil inclination, who have already reached the tower and left the pathways and who clearly see all the pathways before their eyes – they can counsel those who are willing to listen. It is these people that we must trust.

THE AUTHOR WRITES A WEEKLY PARSHA SHEET ON THE TOPIC OF EMES.  To SUBSCRIBE AT NO CHARGE – PLEASE SEND AN EMAIL TO [email protected]