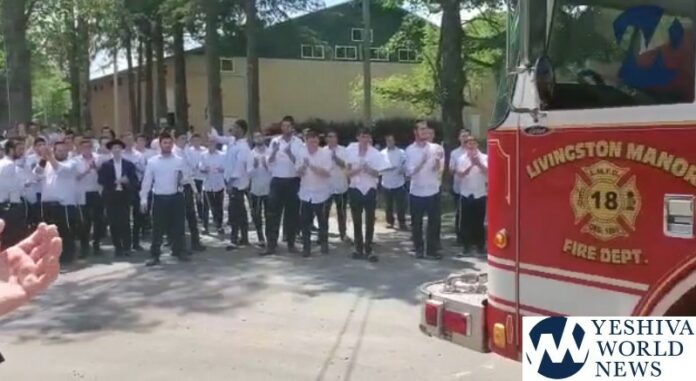 A tremendous kiddush hashem took place at Camp Rayim Mesiva (Aliya) on Thursday when bochurim lined up to applaud and thank firefighters who had worked to douse a blaze that destroyed two of their camp’s bunk houses.

The fire was sparked Thursday morning in one of the bunkhouses and growing out of control for a time, necessitating a major emergency response from fire and Hatzolah personnel.

Thankfully, the fire was extinguished before it could spread further than the two affected bunkhouses, and nobody sustained any injuries in the blaze.

After the incident, Camp Rayim released the following statement:

“First, we would like to assure you that everyone in camp is b”h safe and doing fine. This morning during learning groups, a fire broke out in one of the bunkhouses. B”h our staff made sure no one was in the affected structures or any nearby structures. The fire department swiftly came, contained the fire, and extinguished it.  We thank them for their immediate response and their great work.

“All of the many avenues at our disposal are being implemented to ensure that camp life continues as normal for all of our campers and staff. We thank Hashem for keeping everyone healthy and safe. Wishing an easy fast to all.”