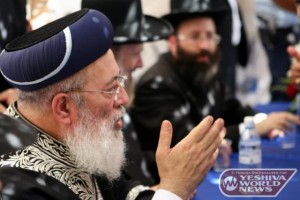 The post has remained vacant for over a decade, since the petira of HaGaon HaRav Shalom Mashash ZT”L, who served alongside HaGaon HaRav Yitzchak Kolitz ZT”L. The meeting was another effort to advance the elections for chief rabbis of the capital.

Mayor Barkat made a deal when he was elected to his first term in office, thereby securing the support of the dati leumi voters. The mayor promised the next chief rabbi of the city would be selected from the dati leumi community. He was unsuccessful in actualizing that promise during his first term and now he is committed to one dati leumi and one chareidi rav as per agreements made during his reelection campaign.

According to the report filed by Yehuda Schlesinger, the former Rishon L’tzion is interested in the position but due to his falling out with Shas and the sons of Maran HaGaon HaRav Ovadia Yosef ZT”L , he is hesitant to accept the post. Rav Amar would be viewed as the chareidi candidate, permitting the mayor to move ahead with a dati leumi Ashkenazi rav.

Schlesinger adds that if given his way, Deri prefers to see Rabbi David Yosef in the post, who is now a member of Shas’ Moetzas Gedolei Hatorah. Alternatively, Deri would turn to his brother to fill the post, Beersheva Chief Rabbi Yehuda Deri.

The leading candidate for the Ashkenazi rav in the dati leumi community remains Rabbi Aryeh Stern, but some fear strong chareidi opposition to his nomination may result in his defeat and the election of a chareidi rav. The dati leumi community would also like to see a stronger Zionist in the post of the Sephardi Chief Rabbi, someone like Tzfas Chief Sephardi Rabbi Shmuel Eliyahu.