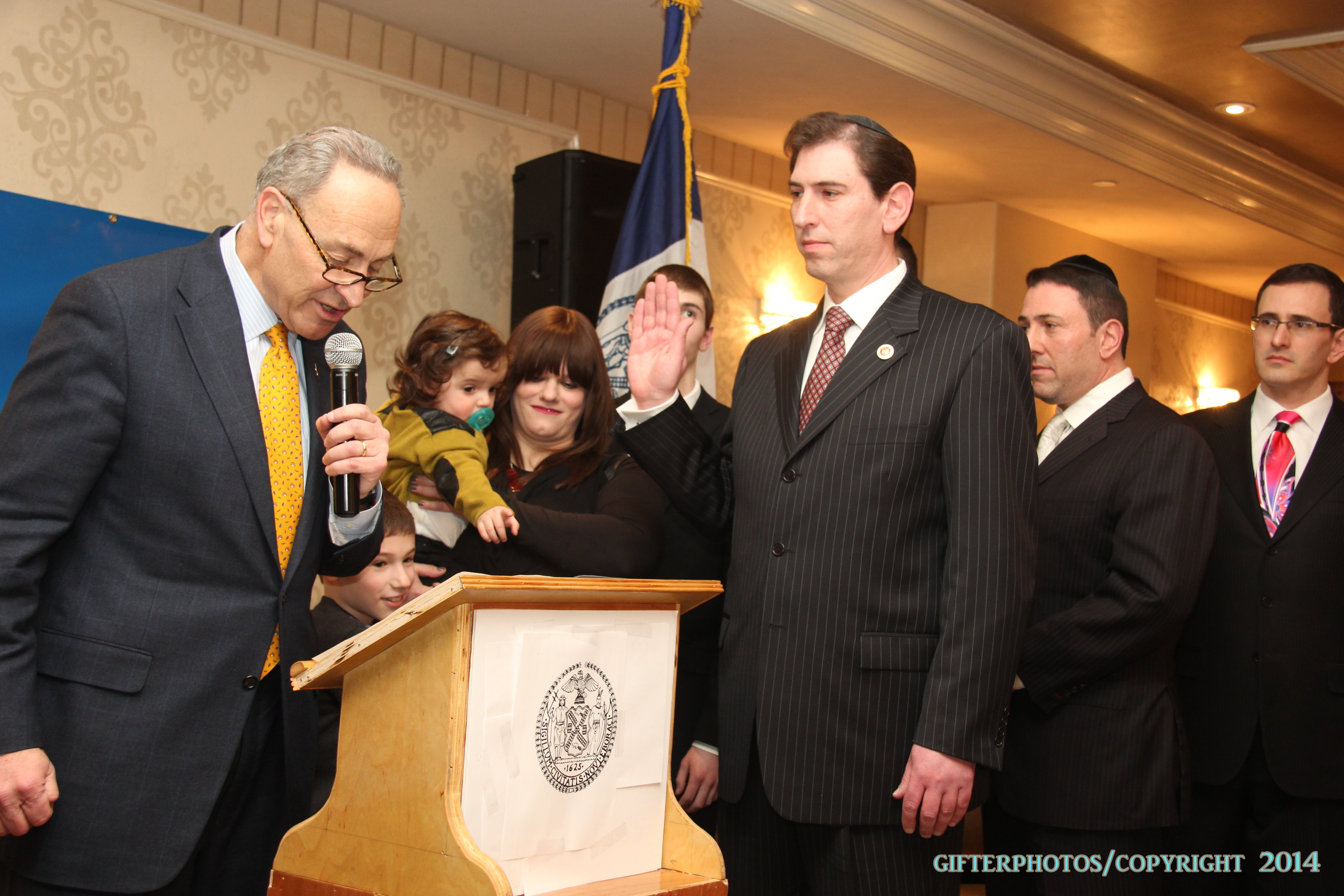 An extraordinary diverse crowd and a full array of elected officials, community leaders and machers gathered Thursday night in Flatbush to celebrate the inauguration of freshman Council member Chaim Deutsch.

“Chaim is a good, humble and committed man, and he has such a commitment to do good” NYC council speaker Melissa Mark-Viverito said in her brief remarks. “In the short time I’ve known Chaim, I’ve come to respect that level of seriousness and thoughtfulness, and He’s going to be an incredible representative.”

Councilman David Greenfield, chairman of the Brooklyn delegation hailed his colleague as a public servant who did more for the community before he entered office than others obtaining public office. “Chaim is a very unique elected official. He’s actually somebody who’s done more for the community before he was elected than most elected officials do every single day,” said Greenfield. “People know that if you need something anytime of the day, literally every day of the week -even on Shabbos in case of emergency – you can reach out to Chaim Deutsch. That’s the kind of guy he is.”

All the speakers, from Public Advocate Tish James, Comptroller Scott Stringer, Councilman Jumaane Williams to a selected group of representatives who spoke on behalf of the various communities in the district, praised Councilman Deutsch for his commitment to serve and for his devotion to lead.

But it was the senior Senator from New York, Chuck Schumer, who stole the show. In a lengthy 21-minute speech, Senator Schumer spoke of his connection to the community, his long attachment to the neighborhood and personal relationship with the freshman council member.

“How many of you here are under 40, raise your hands,” Schumer started off, interacting with the crowd. “OK! You were all born after I was the Assemblyman from this district.” (He was a three-term member of the New York State Assembly, representing the 45th Assembly District from 1975 to 1980).

“I have represented this area for 39 years,” Schumer noted.

Schumer went on to talk about Chaim’s founding of the Flatbush Shomrim, relating it to his surname that stems from the word “Shomer” (guardian).

“For Chaim, it is a great day because he got here the old fashion way. No one put a silver spoon in his mouth, no one plugged him out. He earned it,” said Schumer. “He always had the community in his bones and he worked, and worked. And, frankly, when he ran now, a lot of people said he wouldn’t win but because of his community involvement, because of his strength of character and because he knew so much he got elected.”

“Chaim is a gite neshomo (a good soul). We look into his soul and we know he is someone who will always put the community first. We’ve elected one of our best,” Schumer concluded.

Schumer was then honored to install Deutsch the oath of office.

Deutsch also set a precedent, as the Public Advocate noted in her speech: “This is the only inauguration I’ve been to where the council member served the food first.”

David Heskiel, Police Chaplain and Community Liaison, told YWN that Deutsch was always there for the Sephardic community. “I’ve been working with Chaim for years on issues that matter to the community, and I’m honored to serve as an adviser to issues related to the Sephardic community in Brooklyn,” Heskiel said after the event.