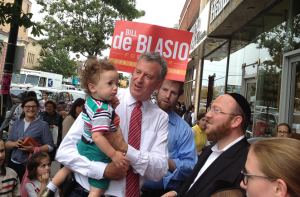 New York City Mayor Bill de Blasio laid out a sweeping liberal agenda for the nation’s largest city during his first State of the City address, but many of his ambitious proposals may find a difficult path to passage.

By virtue of a campaign focused on income disparity, de Blasio has become a leading spokesman in the global movement to address fiscal inequality but in order to enact some of his signature ideas, he must first get approval in a city 150 miles to the north.

Albany lawmakers must sign off on de Blasio’s hopes to raise the minimum wage for city residents and for the centerpiece of his agenda: a tax hike on the rich to fund universal pre-kindergarten.

“We’re simply asking Albany to allow New York City to tax itself: its wealthiest residents, those making a half-million or more a year,” de Blasio said Monday during his address at LaGuardia Community College in Queens. “Raising taxes on the rich makes our commitment to our kids more than just words. It makes that commitment real.”

Because a New York City mayor does not have the ability to raise taxes, de Blasio has been aggressively courting Albany lawmakers to back his plan. Gov. Andrew Cuomo, who is up for re-election, has steadfastly refused to consider a tax hike, instead offering to dedicate existing money in the state budget to pay for the program.

And even as de Blasio spoke on Monday, State Senate Republican Leader Dean Skelos told reporters that he would not allow legislation containing a tax hike on city residents to advance.

But prekindergarten is not the only front on which de Blasio is pressing state lawmakers in the capital of Albany. He revealed in the speech that he plans to ask them next week for the power to raise the minimum wage in the city.

“We will send a powerful signal to the people of New York that we honor work and that we are committed to making work pay,” he said.

De Blasio, who did not specify what he wanted the new minimum to be, joined a national push to raise minimum wage levels. Last month, President Barack Obama called for the federal wage to be raised from $7.25 to $10.

Cuomo and lawmakers reached a deal last year to raise New York’s minimum wage to $9 by the end of next year and it is not clear if they would be willing to support a higher hike that could alienate business leaders.

But de Blasio was undeterred, also calling for expanded living wage legislation and the creation of identification cards for undocumented immigrants, all with the hopes of “raising the floor” for less-fortunate New Yorkers.

“We’re fighting to give everyone a fair shot,” he said during his speech, “so that city government doesn’t set its priorities by the needs of those at the very top … while ignoring the struggle of those born under a less lucky star.”

But de Blasio’s lofty rhetoric may take a backseat to the details of governing later this week: On Wednesday, he will deliver his first budget presentation and is expected to outline the stark fiscal challenges the city faces due to impending contract negotiations with all 150 municipal unions, which could cost the city billions of dollars.