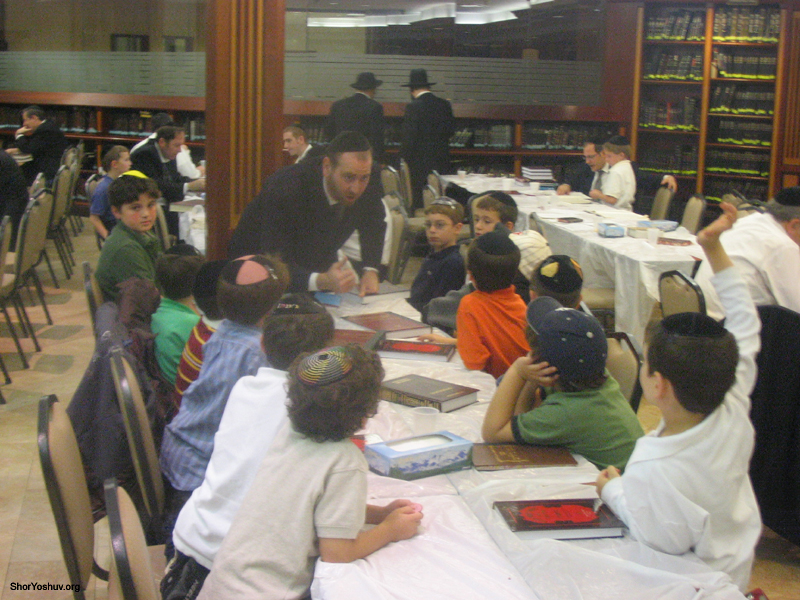 It’s open only one day a year, and for one hour only.  But Yeshivas Mordechai Hatzaddik’s 1148 international branches boast 60,000 kids, or in other words, the highest attendance rate of any yeshiva across the globe! Walk into a beis medrash, shul or shteibel on Purim afternoon anywhere in the world, and you’ll find it packed with clowns and cowboys, policemen and pirates, kings and soldiers, Achashveiroshes, Hamans and of course, Mordechai HaTzaddiks shuckling over shtenders with Chumashim, Mishnayos and Gemaras open, reveling in the sweetness of limud Torah at Yeshivas Mordechai Hatzaddik.

Fifteen years ago, limud Torah was almost lost in the shuffle of Purim, which was already chock-full with the Four M’s—Megilla, Mishloach Manos, Matanos La’evyonim and a Major Seudah. Few adults, and even fewer kids, had time to cram a single hour of learning into the exciting day. Yet, since the founding and extraordinary expansion of YMH, there isn’t a frum kid today who remembers a time when Torah learning wasn’t an integral aspect of Purim. Everywhere in the world, Chassidim and Litvaks, Sephardim and National Religious, avreichim, baalei batim along with Rabbanim and Rebbes, unite for a wondrous hour of limud Torah at Yeshivas Mordechai HaTzaddik.

Sefarim kedoshim teach that one who reads the Megilla as if it were a tale of the past, does not fulfill one’s obligation. Why is this?  We recite in ‘Al Hanissim’, ‘Bayamim haheim, ba’zman hazeh—In those days, in these times.’  The very miracles and hashpaos that Hashem unleashed in the world during the era of Purim are revealed again in the world each and every Purim anew. Chazal say that every mention in the Megilla of ‘Hamelech’ refers to the King of all kings; thus when Esther beseeched the King to spare her life and nation from destruction, she was really entreating before the Master of the world. “And the King stretched out His golden scepter and asked, ‘What is your request? And it shall be given to you.”

Since that day, Purim has been marked as the day when the gates of heaven open vast to admit the tefillos of Klal Yisrael and rain yeshua down upon them. It is the one day of the year when all prayers and entreaties are heard and accepted with love before the Ribono shel Olam. On Purim, there is a halacha, kol haposhet yad, nosnim lo; anyone who appeals for tzeddaka is automatically given.  Modeling this, Hakaddosh Baruch Hu turns with boundless love to His children and asks, “Ma she’eilaseich v’yinasen lach? What is it you want, My child? Ask of me, and I will give it to you!”

Voices so pure, voices so powerful

When Haman’s evil plot to destroy the Jews was publicized throughout the land, Mordechai Hatzaddik promptly assembled a mighty army to combat the enemy. Not an army of formidable warriors or military heroes, but Tziv’os Hashem—an army of young, innocent children.  Though the dreadful verdict had already been signed and sealed, and “Anything signed and sealed with the signet ring of the King could not be repealed”; Mordechai knew that, if anything, tefillos and Torah of pure Yiddishe kinderlach possessed the force to override it.

In the times of Dor Haflaga, when humanity banded together to battle Hashem in the heavens, He was forced to scatter them across the globe, because achdus is inordinately powerful and achieves compelling results. Hashem punished the sinners, but did not annihilate them as He did during the Mabul because of their extraordinary unity.

60,000 kids. Sixty-thousand tinokos shel beis Rabban, and their fathers too. At no other time, and in no other place in the world, do 60,000 Yiddishe kinderlach—Ashkenazic, Sephardic, Litvish, Chassidish, and everyone to the right, left, and center—converge under the roof of one yeshiva as they do for Yeshivas Mordechai Hatzaddik. It’s an hour of unparalleled achdus for Klal Yisrael. An hour when a Migdal Torah is built, a Tower of Unity that breaches the heavens and reaches the Holy Throne.

The Pele Yo’etz teaches that Torah is the very core of Purim, and that pure limud coupled with simcha shel mitzvah, grants this day its immeasurable spiritual potential. On Purim, Hashem turns to us and asks, “Ma she’eilaseich v’yinasen lach—What is your request, and it shall be granted?”  He heeds the prayers of all who beseech Him, but He showers extra affection and closeness upon those who support limud Torah on this awesome day.

Klal Yisrael has a unique formula. We have three golden keys with power to unleash a bounty of salvation in the world: Purim. Tinokos shel beis rabban. Achdus.  Multiply that by 60,000 for the phenomenal results! These are not vague segulos found in a dusty sefer, but the words of Chazal clearly stated in the Sefarim Hakedoshim! Each individual key owns extraordinary strength to bring yeshua, and when combined, the sheer power is inconceivable!  The miracles and zchuyos engendered by limud Torah of tinokos shel beis Rabban on a massive scale are plain to see. Hundreds of donors have personally attested to the incredible yeshuos they merited after pledging their support to YMH; their stories are supernatural and speak for themselves… Sick who were cured, childless couples who now cradle infants, and older singles happily married…

This Purim, the three keys are in your hand! Don’t let the day go by! Harness the combined force of this awesome day and the achdus of 60,000 tinokos shel beis Rabban to plead your case before the Kisei Hakavod!

For more information and to sponsor a branch of Yeshivas Mordechai Hatzaddik, call: 718-301-9795, or email: [email protected]