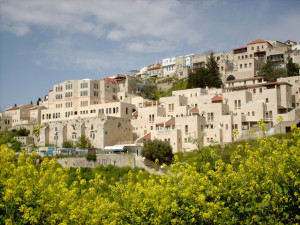 The chareidi community in Tzfas is up in arms over the recent opening of the Tzfas Country swimming pool on Shabbos, a move they view as violating the city’s long-standing status quo.

The situation is not clear however for some residents insist the pool has opened on Shabbos for the past 30 years. Chareidi who do not feel this is so were out protesting. Veteran city resident Baruch Adler is quoted telling Kikar Shabbos that he too favors preserving the city’s religious status quo but the opening of the pool does not represent a change in that status, insisting the pool has operated on Shabbos for over 30 years.

For those who feel opening the pool on Shabbos represents a new unwanted reality, they point a finger of blame at Mayor Ilan Shochat, insisting he is directly responsible. They feel that today, with eight chareidim on the city council, they no longer have to kowtow to the mayor and the secularists and they are not going to permit the pool to operate. Officials in City Hall insist the mayor has absolutely nothing to do with the pool opening on Shabbos.

Over 200 people took part in a Shabbos protest against the pool. They conducted kabolas shabbos outside the pool area and the incident deteriorated into a verbal confrontation before the mispallalim disbanded.