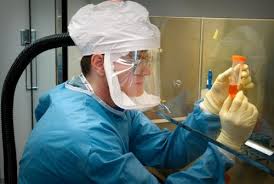 Health officials have confirmed a second U.S. case of a mysterious virus that has sickened hundreds in the Middle East.

The latest case is not an American – he is a resident of Saudi Arabia, visiting Florida, who is now in an Orlando hospital.

He was diagnosed with MERS, or Middle East Respiratory Syndrome, Sunday night. It is a respiratory illness that begins with flu-like fever and cough but can lead to shortness of breath, pneumonia and death.

Fortunately, the U.S. cases so far have not been severe. The first case, a man in Indiana, was released from a hospital late last week. And the second patient is doing well, officials said. The two cases are not linked, officials said.

“The risk to the public remains very low,” said Dr. Anne Schuchat of the Centers for Disease Control and Prevention.

MERS is a respiratory illness that begins with flu-like fever and cough but can lead to shortness of breath, pneumonia and death.

Most cases have been in Saudi Arabia or elsewhere in the Middle East. But earlier this month a first U.S. case was diagnosed in a man who traveled from Saudi Arabia to Indiana.

That man, an American, was a health-care worker at a hospital in Saudi Arabia’s capital city who flew to the United States on April 24 on a plane that originated in Riyadh, stopped in London and then landed in Chicago. The man took a bus to Munster, Indiana where he became sick and went to a hospital on April 28.

He improved and was released from a Munster hospital on Friday. Tests of people who were around the man have all proved negative, health officials have said.

Health officials now must track down fellow travelers who were around the newest case, and this time it will be more challenging: There were more flights involved.

This man also was a health-care worker at a hospital where MERS cases were being treated, the CDC said. He traveled on May 1 on flights from Jeddah, Saudi Arabia, first to London, then to Boston, then to Atlanta, and finally to Orlando. He went to a hospital on May 8 and was placed in isolation.

The first flight was Saudi Airlines flight 113 to London, according to a Public Health England press release. The U.S. government did not identify the flight information for the other legs.

Health officials did not immediately release additional detail about his travels or his week in Florida, except to say he was not at any theme parks and remained in the Orlando area to see family.

The man is at Dr. P. Phillips Hospital in Orlando. He arrived there with relatively mild symptoms, is stable and doing well, but there is no timetable for his release, said Dain Weister, a spokesman for Florida’s health department.

As early as the first flight, the latest case was suffering fever, chills and a slight cough. That doesn’t necessarily mean he infected anyone. Experts think MERS cases are most infectious when they are severely ill, with symptoms like pneumonia and difficulty breathing, Schuchat said.

However, health officials are trying to contact as many as 500 people who were on the three flights within the United States to let them know the situation and watch for symptoms. People on the flight from Jeddah to London also will be contacted, CDC officials said.

MERS belongs to the coronavirus family that includes the common cold and SARS, or severe acute respiratory syndrome, which caused some 800 deaths globally in 2003.

The MERS virus has been found in camels, but officials don’t know how it is spreading to humans. It can spread from person to person, but officials believe that happens only after close contact. Not all those exposed to the virus become ill.

But it appears to be unusually lethal – some estimates have suggested it has killed nearly a third of the people it sickened. The estimate has been dropping as health officials have begun diagnosing more and more cases with less severe illness. But the estimated fatality rate for MERS still is far higher than what’s seen with seasonal flu or other routine infections.

Fortunately, it is not as contagious as flu, measles or other diseases. There is no vaccine or cure and there’s no specific treatment except to relieve symptoms.

Overall, 538 people have been reported to have the respiratory illness, including 145 people who have died. So far, all had ties to the Middle East region or to people who traveled there. As many as one-fifth of cases have been in health-care workers, Schuchat said.