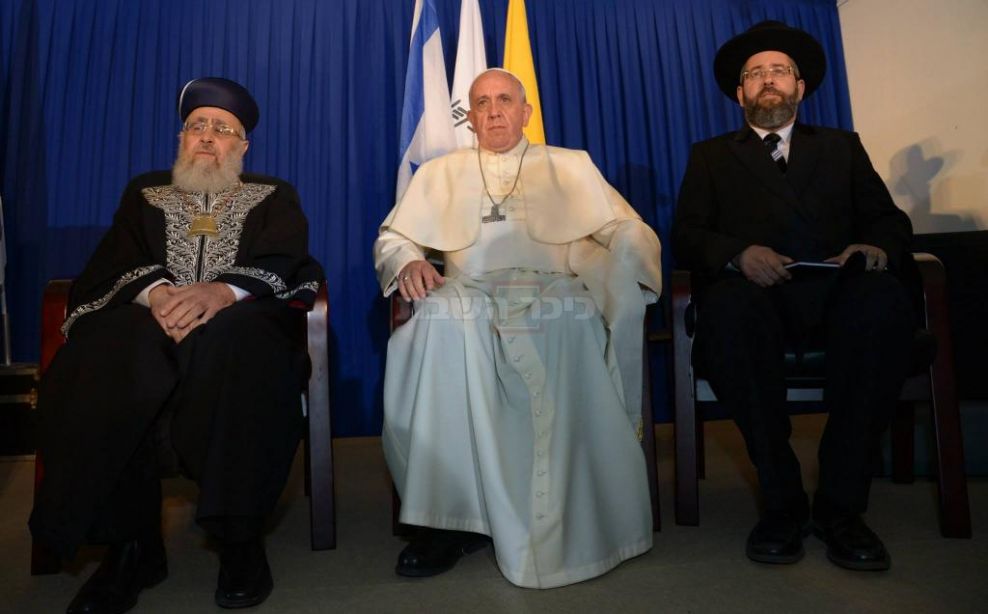 Pope Francis, who is visiting in Israel, met with Rishon L’Tzion Rabbi Yitzchak Yosef Shlita and Chief Rabbi David Lau Shlita on Monday, 26 Iyar 5774 in Yerushalayim. The meeting was held in Heichal Shlomo.

Rav Yosef stated “I congratulate him and thank him for all he does for humanity and the Jewish communities in the world. Welcome to Jerusalem”.

As expected, Rav Yosef was wearing the “Luchos HaBris” which he received from Maran HaGaon HaRav Ovadia Yosef ZT”L on the day he officially assumed the post of Rishon L’Tzion, told “you will need these one day”.

Rav Ovadia had a custom of wearing them when he met with religious leaders including the pope. The Luchos HaBris was his response to the crucifix worn by the pontiff. Inscribed on the golden Luchos HaBris:

The pope responded with הנה מה טוב ומה נעים שבת אחים גם יחד and he received the sefer מצרה לרווחה. The pope thanked the chief rabbis for the warm welcome and explained during his first months as pope he met with Jewish leaders as part of his effort to mend fences.

The media was then instructed to leave and the three held a private meeting. Rav Lau told the pope he wishes to fulfill the wish of an ill Christian child being treated in Israel, to shake his hand.