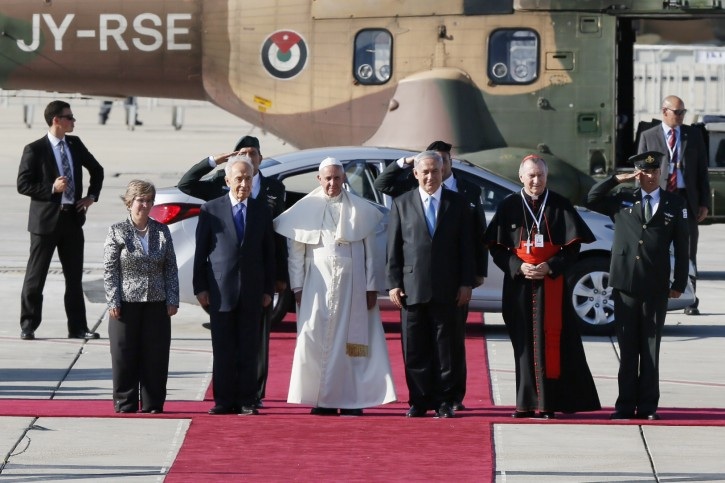 Prime Minister Binyamin Netanyahu on Monday afternoon 26 Iyar met with Pope Francis at the Notre Dame of Jerusalem Center and made the following remarks:

“We have hundreds of churches here in the Land of Israel, in Nazareth Capernaum, Korazim and we maintain each one, not one stone has been moved.

We maintain the rights of Christians in the State of Israel. To my sorrow, this is not the case in many places in the Middle East. We respect Your Holiness’s approach on religious tolerance; Israel maintains this tolerance.”

“We also hope that your call for tolerance, coexistence and an end to incitement, anti-Semitism and terrorism will be accepted by all of our neighbors. I would like to thank Your Holiness for your moving visit today to the memorial to the victims of terrorism.

“If the incitement against the State of Israel ceases, along with the terrorism, there will be no need for the means that we have undertaken, such as the security fence, which has saved lives, thousands of lives. I long for the day in which Pope Francis’ call to recognize the State of Israel, the right of the Jews to a state of their own, to live in security and peace, will be accepted by our neighbors. This will bring, if not peace on earth, then at least peace in this part of the earth.”

Prime Minister Netanyahu gave Pope Francis an original 1698 drawing of the Church of the Holy Sepulcher in Jerusalem. The rare historical shows the main space of the church with the “Holy Sepulcher” in its original modest format (before it was destroyed by earthquakes and fires over the years).

The print is by well-known Dutch artist Cornelis de Bruijn who visited the country in 1698. The back of the print, which is framed in the yellow/gold-and-white Vatican colors, bears the inscription “The interior of the Church of the Holy Sepulcher in Jerusalem, 1698” in Italian.