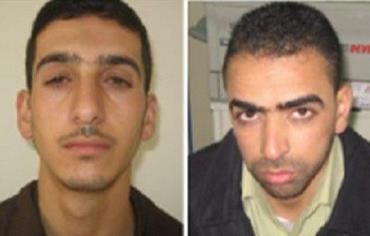 Israel on Thursday identified two well-known Hamas operatives in the West Bank as the central suspects in the recent kidnapping of three Israeli teenagers, in the first sign of progress in a frantic two-week search for the missing youths.

Officials said the two men have been missing since the teenagers disappeared, and that a massive manhunt is underway for them.

In a statement, Israel’s Shin Bet security service identified the men as Marwan Qawasmeh and Amer Abu Aisheh. It said both men are activists from the Hamas terror group in Hebron, the area where the youths disappeared on June 12.

Israeli Prime Minister Benjamin Netanyahu called on Palestinian President Mahmoud Abbas, who has condemned the kidnapping, to end a unity government he formed with the backing of Hamas earlier this month.

“I now expect President Abbas, who said important things in Saudi Arabia, to stand by those words (and) to break his pact with the Hamas terrorist organization that kidnaps children and calls for the destruction of Israel,” he said.

Following the disappearance of the teens, Israel launched its broadest ground operation in the West Bank in nearly a decade, rounding up nearly 400 Palestinians, most of them Hamas terrorists.

Hamas terror leaders in Hebron confirmed the two suspects were members, and said Israeli troops have targeted the men’s homes since the beginning of the operation.

The officials, speaking on condition of anonymity because of fears for their safety, said the brothers and wives of the two men had been taken into custody, though the women have since been released. They said troops had entered the homes several times, conducting intense searches and confiscating certain items as evidence.

While Abbas has refused Israeli calls to break up his alliance with Hamas, he has instructed his security forces to continue a controversial policy of security coordination with the Israelis.

A senior Palestinian intelligence official said the two suspects are believed to be hiding and that Palestinian security forces were also searching for them. He said the fact that the two men have been missing since the kidnapping is “clear evidence they have links with the abduction.”