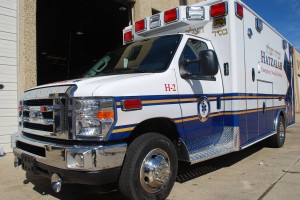 The following article is from the Chicago Tribune:

The room was a flurry of ACE wrap and so many men in bright orange splints that it could have been a mass accident scene except for the occasional jokes and lack of blood.

But the session on splinting was serious business. The volunteers paid close attention as Kaz, an orthopedic surgeon with the Illinois Bone and Joint Institute, discussed various types of fractures and how to splint them.

“You’re there for the patient,” he said, pausing in front of a man whose splint was secured across his chest. “If they’re more comfortable without what you put on, be a mensch and take it off.”

No one needed a translation of the Yiddish term. This was a monthly training session of Hatzalah, a volunteer emergency response service operated by the city’s Orthodox Jewish community.

Hatzalah — Hebrew for rescue — provides emergency response, at no charge, in a geographical area encompassing the Far North and Far Northwest side neighborhoods of West Rogers Park and Peterson Park, and parts of Skokie and Lincolnwood.

It isn’t meant to replace 911. Hatzalah’s emergency medical personnel, who receive ongoing training from the Chicago Fire Department, work with the fire departments in their coverage area and call 911 for assistance if patients need more care than they can provide.

But Hatzalah can provide crucial emergency care within minutes of a call, the group’s volunteers say — and members of the Orthodox Jewish community may be more likely to call Hatzalah than 911.

The Orthodox Jewish community is close-knit. People live in close proximity to one another because they don’t ride in cars on the Sabbath and must be walking distance from a synagogue. They have a tradition of taking care of their own needs.

“We have been raised to take care of our community members,” said Joel Gorenstein, a Hatzalah coordinator. “We have parallel organizations, parallel to the municipal organizations.”

When it comes to emergency services, “sometimes there are religious sensitivities that only another Jew would understand,” Gorenstein said, like the importance of modesty.

“Not to say that the wonderful paramedics in the Chicago Fire Department or those in Skokie or Lincolnwood are not sensitive to it, but from the patients’ perspective, they may feel that we might be more sensitive. There can be an emotional comfort.”

But Hatzalah will serve anyone in its geographical area, Montrose said, and has treated many non-Jews.

Hatzalah was once called to a car crash by a member of the community who witnessed it, said Sol Starck, a board member and coordinator, and among the injured were two nuns. “We attended to those two nuns happily. As soon as the Fire Department arrived, we transferred care,” he said.

“Anybody who calls us within our geographic area, be it Jewish, white, black, Asian — it doesn’t matter to us,” said board member Simcha Frank, who, like the other board members and coordinators, is also a responder. “We will respond.”

The concept is not new in the Orthodox Jewish community. There are Hatzalah groups around the country and the world. The Hatzalah in Brooklyn has been operating for more than 30 years, and answers more than 70,000 calls a year.

Hatzalah Chicago was launched at the end of 2011. It fields 40 volunteers who are licensed emergency medical technicians and 16 certified emergency medical dispatchers. In October, Hatzalah bought an ambulance, which bears the group’s name in Hebrew lettering.

Volunteers are on call around the clock, 365 days a year — including the Jewish Sabbath. People reach Hatzalah by calling an emergency number widely circulated within the Orthodox Jewish community.

“We all have radios with us, at our side, whenever we’re in the area; we carry them with us 24/7,” said Starck. One Hatzalah volunteer’s family grew so accustomed to seeing his radio at the table that they named it Stanley.

When someone calls for help, a dispatcher relays the address using a private digital frequency radio. The two or three volunteers closest to the call are dispatched to the scene.

They arrive in less than two minutes. “You have 40 people within a 2-mile radius,” Montrose said.

“Every one of us, in the back of our vehicles, (has) equipment that can help in almost any situation,” said Starck. “Obstetric kits, trauma units, medications for difficulty breathing — anything you can do pre-hospital in the field, we’re trained and equipped to do at the basic level.”

The dispatcher also either sends Hatzalah’s ambulance or contacts 911.

Ira Piltz, of West Rogers Park, was a grateful recipient of Hatzalah’s services. A few weeks ago, his 3-year-old daughter passed out as he held her in his arms.

He called Hatzalah. In less than two minutes, the first responder called 911 and started giving the girl oxygen before paramedics arrived. His daughter had eaten prescription pills thinking they were candy. She ended up hospitalized for two days.

That quick provision of oxygen “saved our daughter from being intubated,” he said.

Hatzalah’s purpose goes beyond a rapid response time. The Chicago Fire Department’s average response time, after all, is only 3.5 minutes, according to a spokesman.

Hatzalah offers some members of the community a more comfortable place to turn for help, its volunteers say.

“People are willing to reach out to us when they’re not necessarily willing to wake a fireman,” said Montrose. “The best response time in the world isn’t necessarily going to get help to somebody who’s unwilling to call.”

In addition, because the EMTs in Hatzalah are also community members they are often right there when an emergency occurs and able to help immediately. That can be crucial, said Chicago Fire Department spokesman Larry Langford.

“That two minutes of time can be constructively used to save a life,” he said.

“We consider Hatzalah one of our partners in care,” said Leslee Stein-Spencer, manager of medical administration and regulatory compliance for the Chicago Fire Department, who oversees ongoing emergency medical services training.

She credited Hatzalah with pioneering partnerships the department now has with responders like the security forces at the University of Illinois at Chicago and Loyola University Chicago.

When Hatzalah began and had no ambulance, the Fire Department developed a collaborative relationship in which Hatzalah would contact 911 when it got a call for help and the city would dispatch an ambulance at the same time.

The Fire Department has arranged for Hatzalah members to meet 911 dispatchers and ride along with paramedics, she said. The department developed protocols about the partners’ roles at an emergency scene.

Hatzalah responders are often on the scene before Fire Department paramedics arrive, and serve an important function, said Joseph Danielak, an emergency medical services field chief for the Chicago department.

“We would get a lot of our information from them — what’s going on with the patient’s vital signs, the patient’s medication, their history,” he said. “They’re really good.”

Hatzalah has gone on more than 340 calls so far this year, ranging from falls to difficulty breathing to fractures.

Frank said Hatzalah sometimes has to remind fellow members of the Orthodox community that “it’s OK to call us on Shabbos (the Sabbath). It’s OK to drive on Saturday to the hospital if you’re not feeling well.”

“Judaism values life; it’s one of the key points,” he said.

For volunteers, the key point of their involvement with Hatzalah is service.

“From a young age, we are raised to give back to our community. It’s a big part of being Jewish,” Gorenstein said. “In the event I’m ever needed, I want to be prepared.”