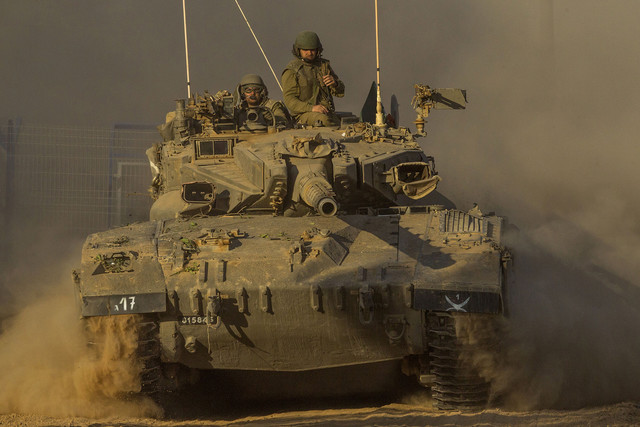 20:30: A rocket has struck a home in the Shaar Hanegev. Bichasdei Hashem, there are no injuries reported.

20:28: Two of the soldiers injured earlier in Gaza, are reportedly in serious condition.

20:24: Three IDF troops have been injured at the Gaza border when an antitank missile was fired at their jeep. They have been evacuated to a hospital in unknown condition.

18:25: One person injured running for cover in Ashdod, described in light condition.

18:21: A rocket hit the home of a yard in Gan Yavne. Shrapnel struck  a nearby shul. Damage reported in both locations. B”H no fatalities or injuries at this time.

18:20: Some shrapnel from last barrage of rocket fire landed on Chazon Ish Street in Bnei Brak. No injuries being reported.

18:00: At least 4 rockets intercepted over Tel Aviv moments ago.

17:10: A rocket was just intercepted over Netivot by the iron Dome.

16:54: Ynet reports PA Chairman Mahmoud Abbas (Abu Mazen) is meeting in Cairo with the foreign minister of France in the hope of advancing a Gaza ceasefire.

16:52: Since the night the IDF attacked 150 Gaza targets including underground launchers, tunnels, homes of terrorists and weapons manufacture locations.

16:45: PA Chairman Mahmoud Abbas (Abu Mazen) has arrived in Turkey to speak with the president about ending the Gaza military operation.

16:37: Israeli human rights organizations are calling to set up an immediate mechanism to remove wounded Gazans from that area.

16:35: The main battle between the IDF and terrorists in Gaza over the past two hours has been taking place in Jabalya as the IDF tries to bring a halt to the terrorist control of the area.

16:19: The IDF has uncovered numerous tunnels, some filled with munitions.

16:12: Three rockets landed in open areas in the Eshkol and S’dot Negev Regional Council. B’chasdei Hashem no fatalities or injuries.

16:07: UNRWA officials report 30,000 Gazans left their homes today and are now residing in refugee centers that were established in Gaza schools by the UN affiliated organization.

16:02: The Iron Dome units have become a growing attraction as more and more Israelis wish to take a “selfie” with the Iron Dome in the background.

Citizen Eli Abarjil this morning decided to do something for Iron Dome soldiers and he set up a barbeque and is distributing hot dogs free of charge to Iron Dome teams until Shabbos.

16:00: Another round of rocket fire directed at the Eshkol Regional Council minutes ago. Rockets landed in open areas.

15:59: Paratroopers operating in Gaza shot and wounded a terrorist. There were no injuries to the IDF force. The terrorist was then treated and transported by an IDF paramedic unit and is now being treated in Soroka Medical Center in Beersheva.

15:10: Police Chief Yochanan Danino announced the department will not tolerate violence, rioting, stone-throwing or any attempt to block roads as part of protests.

14:44: Sirens in the Eshkol Regional Council.

14:22: Four rockets were fired at Beersheva. Three intercepted by the Iron Dome and the last landed in an open area.

14:14: Police spokesman reports stones thrown at police at the Mughrabi Gate to Har Habayis by Arab rioters. Police instructed to move in and disperse the rioters.

13:52: Police Chief Yochanan Danino just completed an assessment pertaining to Har Habayis. During that assessment concerns were raised over rioting and violence among both Israeli and PA (Palestinian Authority) Arabs. Police are on alert, fearing the violence may spread on Shabbos. Police expect violence in the Nachal I’ron (Wadi Ara) area on Shabbos.

12:56: Haaretz diplomatic correspondent David Ravid reports Israel decides to evacuate families of diplomats in Turkey after violent demonstrations next to the embassy in Ankara and the consulate in Istanbul. Read the complete story.

12:48: Sirens in the Eshkol Regional Council, Zikim and the Ashkelon area.

12:40: Shimon Buskila, who runs a barber shop in Sderot, announces that any soldier coming to his store will receive a free haircut for he feels this is the least he can do.

Speaking to Channel 2 he added “I ask mechila from all of the parents and spouse of the soldiers for we in Sderot cannot take it anymore and the time is overdo to stop Hamas and the rocket fire. It is our prayer they will all return safely. Please do not be angry with us”.

12:38: The levaya for IDF Sergeant Eitan Barak HY”D, who fell in the Gaza operation, will take place on Sunday, 22 Tammuz at 17:00 in the Old Herzliya Beit Chaim.

12:27: Sirens sounding in Ofakim, Chatzeirim, Peduim, Ra’anan and other areas.

11:05: Sirens sounding once again in the Eshkol Regional Council.

11:04: Sirens sounding once again in the Eshkol Regional Council.

11:03: Since the start of operation over 260 people have been treated in Soroka Medical Hospital in Beersheva. 14 are currently admitted.

10:57: Sirens in Ashkelon and the industrial area as well as surrounding communities.

10:48: Sirens sounding once again in the Eshkol Regional Council.

10:38: The prime minister is expected to make a statement to the nation at 11:00. The cabinet will convene at 11:30 at which time ministers will be briefed on the ongoing military operation.

10:29: Many Gaza residents are reportedly without running water.

10:26: IDF soldiers in Gaza now working to detonated   two tunnels. There is occasional RPG and sniper fire directed at them.

10:23: Sirens once again in the Eshkol Regional Council communities including Sderot.

10:10: No injuries or fatalities being reported in the last wave of rocket fire. Seven rockets were intercepted by the Iron Dome.

08:42: Muslim violence was already reported earlier on Har Habayis compelling police to use riot control methods to restore order. No injuries are being reported.

08:27: Major barrage of rocket fire to the entire Ashdod and Ashkelon districts.

08:10: The IDF Spokesman reports “about 50 rockets have been fired from Gaza since last night of which 25 hit Israel and 20 were intercepted by the Iron Dome.

08:08: Sirens sounding in the Ashkelon, Negev and Beersheva districts.

07:55: BD”E: It has been confirmed that an IDF soldier fell in the line of duty in Gaza during the night HY”D. Read the entire article.

07:20: The Homefront Command continues to release messages urging residents to remain vigilant as rocket fire into the homefront is expected to escalate before it is brought under control.

07:18: B’chasdei Hashem it is reported that IDF soldiers are facing minimal resistance. Channel 2 correspondent on the Gaza border Nir Dvori feels Hamas was taken by surprise regarding the size of the force.

07:13: Two rockets exploded in the Eshkol Regional Council during the night. B’chasdei Hashem there are no injuries or fatalities.

07:08: Dozens of right-wing activists on Thursday night confronted the left-wingers taking part in a protest at Rabin Square calling on the government not to attack Gaza, citing the moral atrocities associated with such a move. The right-wingers called them traitors for holding such an event at a time the nation is at war and millions are sitting in bomb shelters.

07:03: IDF ground forces operating in areas throughout Gaza, each with a specific mission for that area.

06:56: Heavy exchanges of gunfire between IDF soldiers and terrorists in southern Gaza.

06:50: The IDF is dropping leaflets for southern Gazan residents, instructing them to evacuate the area. This includes Tel Sultan and Rafil.

06:01: There are reports of  military censorship regarding an incident that occurred in Gaza overnight involving IDF & Hamas. Details soon.

5:23: This afternoon the Secretary spoke with Prime Minister Netanyahu, who described the terrorist attack this morning near Kibbutz Sufa, and the imminent threat to Israeli civilians posed by Hamas tunnels from the Gaza Strip.

The Prime Minister explained his decision to launch an operation to target the threat of further terrorist infiltration through tunnels into Israel.

The Secretary reaffirmed our strong support for Israel’s right to defend itself against terrorist threats emanating from tunnels into Israel and expressed our view that this should be a precise operation to target tunnels, as described in a statement from the Israeli Defense Forces.

04:30: Palestinian Authority President Mahmoud Abbas is set to visit Turkey Friday, followed by stops in Bahrain and Qatar, as he attempts to find a path to a Gaza ceasefire.

04:18: 7 Palestinians have been killed so far since IDF started the ground operation in Gaza..

03:23: IDF officer tells YWN that for now the Israel ground operation will limit itself to eastern corridor, will focus on routing out tunnels.

02:00: A spokesperson for UNRAWA (United Nations Relief and Works Agency) tweets that he has lost all communication with other UN members in Gaza.

01:16: At least four rockets were just intercepted over Ofakim.

00:06: Minister Naftali Bennett tells Channel 10 the decision to enter with ground forces was made with a “heavy heart” but the cabinet realized there was no other alternative.

Bennett explains one focus of the operation is to address the vast tunnel network.

“We can expect difficult days. The decision was a difficult one to protect Am Yisrael but nonetheless a complicated operation… We are also operating against the rockets but the tunnels are the main focus at this point”.

00:05: The IDF has bombed the missile storage facility next to Wafa Hospital leading to explosions that have caused damage to the hospital.

Hamas leaders are believed to be holed up in a large underground bunker under Sheba Hospital.

00:04: IDF Spokesman Brig.-Gen. Moti Almoz explains the second phase of the operation is underway. IDF forces, a large ground force supported by a massive IAF and naval force, are working against tunnels and the terrorist infrastructure. I cannot reveal details of the operation as we are concerned for the well being of our forces. All officers on all levels approved the plan and everything possible was done to bring the troops to a state of preparedness for this moment.

Explosions continue at Wafa Hospital – apparently the rockets that were stored there causing secondary and tertiary blasts.

00:03: Since the start of the operation more than 1497 rocket have been launched at Israel. 1093 of those rockets hit Israel. Approximately 301 rockets were intercepted by the Iron Dome missile defense system. The IDF has targeted over 2,037 terror targets, with both naval and aerial capabilities.

00:01: IDF forces began a ground incursion into Gaza around 10:30PM on Thursday night. Israel had reportedly warned Hamas of a ground incursion if the rockets would not stop being fired into Israel. The IDF Spokesman said the operation “will be expanded for as long as it’s necessary, in accordance with situation assessments.”

UPDATE: 12:00AM IL: With the clock striking midnight on Thursday evening / Friday morning, Israel has now entered “Day 11 of Operation Protective Edge”. Stay with YWN as we continue our non-stop 24 hour news coverage – updated just seconds after an event occurs.