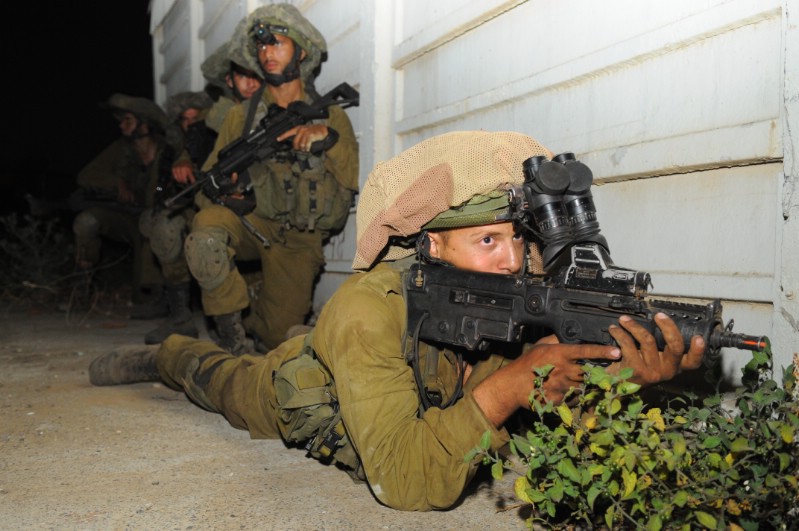 23:50: 1 Palestinian has been killed, at least 21 wounded in major clashes ongoing right now at the Kalandiya checkpoint in Israel. This is the largest Palestinian protest in many years.

Should the operation continue or stop?

46% Continue until Hamas is brought down

Will there be quiet in southern Israel after the operation?

Are you satisfied with the performance of PM Netanyahu?

23:10: Thousands of Palestinians are protesting and marching from Ramallah toward Jerusalem

22:23: Iron Dome has intercepted rockets fired from Egypt’s Sinai into Eilat, B’chasdei Hashem there have been no injuries reported.

22:14: Brazil Recalls Its Ambassador To Israel. The Brazilian Ministry of External Relations released a statement saying: “We strongly condemn the disproportionate use of force by Israel in the Gaza Strip.” Spokesman for Israel’s Foreign Ministry Yigal Palmor responded: “This is an unfortunate demonstration of why Brazil, an economic and cultural giant, remains a diplomatic dwarf.”

22:06:US Secretary of State John Kerry will not stay in the Middle East indefinitely trying to broker a ceasefire to halt the Gaza conflict and will decide soon whether the parties are willing to come to an agreement, a senior US official said on Thursday.

“Gaps remain between the parties, so his focus is on finding a formula that both sides can accept,” said the senior US official. “But he isn’t here for an indefinite amount of time and in the near future he will determine whether there is a willingness to come to an agreement on a ceasefire.”

21:22: Lufthansa extends suspension of flights to Tel Aviv by 24 hours.

20:12: One person lightly wounded when a rocket fell near a greenhouse in the Eshkol region. Other rockets landed in open areas

19:55: The Iron Dome has just intercepted a rocket in the Chof Ashkelon region.

19:48: According to multiple reports, there have been more than 80 Gazans killed in IDF strikes on terror targets so far today.

19:43: A barrage of rockets were just fired at Beersheva and surrounding areas. There are no injuries reported.

19:35: Four rockets have just landed in the Eshkol Regional Council area. There is damage to a local shul.

18:46: Arab MKs are not attending the presidential swearing-in ceremony of Reuven Rivlin.

18:37: A rocket has fallen in a S’dot Negev Council kibbutz. B”H there are no reports of fatalities, injuries or damage.

18:33: Knesset Speaker Yuli Edelstein begins the ceremony with a mi’sheberach for IDF soldiers.

18:29: The ceremony that will conclude with Reuven Rivlin taking the oath of office to become Israel’s 10th president will get underway in the Knesset in the coming minutes. The event is a tapered down version of the standard ceremony as Rivlin felt the planned event was out of place while the nation is at war.

In his address, outgoing President Shimon Peres has harsh words for the international community during Operation Protective Edge.

18:27: Channel 2 Arab Affairs Correspondent Ehud Ya’ari reports the area UNRWA spokesman reports that Hamas rockets were fired near the UNRWA school in Beit Hanoun. The IDF is investigating the reported incident in which 15 children were killed and many people wounded.

18:10: UNICEF reports 181 children have been killed in Gaza to date during Operation Protective Edge.

17:44: At least one rocket intercepted earlier in the Kiryat Malachi area.

17:26: Another round of rocket fire to the Ashdod area.

17:23: Two rockets intercepted and one landed in an open area in the last rocket attack in the W. Negev.

17:11: Senior Arab affairs analyst Ehud Ya’ari comments “I don’t believe Hamas has reached a breaking point. That would require a different type of operation, one that I am not sure is approved”.

17:10: UNRWA spokesman in Gaza Adnan Abu Hasana says there was no IDF warning before the Beit Hanoun school was hit. It is added that the IDF was informed of the location and status of the school, citing the death toll is 15, primarily children, and over 200 wounded.

17:06: Sirens to the Ashkelon and Beersheva districts. Sirens sounding numerous times in some areas!

16:55: Four IDF soldiers have been discharged from Beilinson Hospital today. An additional 19 have been discharged earlier B”H. Some of them explain they have not been home since the start of Operation Brothers Return, some two months ago, and yet they are trying to rejoin their units rather than heading home to convalesce.

16:43: Fifty-one wounded hospitalized in Soroka Medical Center, of which four are in serious/life-threatening condition.

16:43: Rockets landed in open areas in the Eshkol Regional Council without causing fatalities or injuries B”H.

16:41: The Midrash relates that during the Jewish war against Midian (Bamidbar ch. 31), every soldier that went out to battle had another person designated to daven and study Torah for him.

Rabbi Moshe Sternbuch of Jerusalem explains: If the Almighty shows us miracles and we do not respond by strengthening ourselves spiritually… then we are handed over to the forces of natural law and the missiles inexplicably will begin to hit their targets with greater frequency. That means the lives of our fellow Jews – our brothers and sisters living in Israel – are in mortal danger.
That is why we must raise our level of consciousness of God’s Presence, to the point where we become worthy of supernatural treatment.

16:37: Israel Broadcasting Arab Affairs Correspondent Gal Berger reports a Gaza health official places the death toll in the UNRWA school at 15 with over 200 wounded. The wounded were transported to three Gaza hospitals.

16:35: Two rockets were intercepted over Barzilai Hospital. There are no injuries being reported in the last wave of rocket fire.

16:30: Additional sirens to Ashkelon communities in addition to the Eshkol communities.

16:28: Sirens in Nitzanim, Be’er Ganim, Ashkelon, the industrial are and the surrounding communities.

16:24: CHANNEL 2: It is estimated that 1,500-3,000 Israelis remain stranded in Turkey. Israel is working to get four flights to there today but it is uncertain if this will occur.

16:10: Heavy fighting between IDF and terrorists in the Rafiach area of southern Gaza.

15:33: The cabinet is convening at this time. The prime minister commented to the media prior to the start of the meeting. Following are highlights of  his remarks.

• IDF continues operating in Gaza at this time
• The IDF has delivered a significant blow to Hamas
• Operation Protective Edge continue from the ground and air
• There is significant success in locating and eliminating tunnels
• I convey my appreciation and regard for the fighting forces and condolences to the families of the fallen, as well as wishes for a total recovery to all the wounded. I visited with many of them.
• I would like to thank and commend the citizens of Israel for their support and warmth towards IDF forces.

15:30: Gaza sources report ten dead in a strike at an UNRWA school in Beit Hanoun in northern Gaza. There are no details or confirmation.

15:17: A fire resulted in the Moav Regional Council following a rocket explosion in that area in the last attack.

14:45: A number of European carriers announce they are joining American carriers and resuming air service to and from Tel Aviv.

14:33: A rocket exploded in the Yoav Regional Council resulting in property damage. B’chasdei Hashem there are no reports of fatalities or injuries.

14:19: The rockets were intercepted above Kiryat Gat in the last attack.

14:08: At least three rockets fired in the last attack were intercepted by the Iron Dome.

14:02: Sirens in Kiryat Malachi, Ashdod, Ashkelon regions and the surrounding areas. Multiple sirens in some areas. In some areas explosions are reported but sirens were not heard.

13:57: French President Francois Hollande announced his country will give €11 million in aid for Gaza residents. The aid will be given to government agencies operating in the region

13:28: Air France announces it is not resuming flights and that is the airline’s position until further notice.

12:48: Ben-Gurion University cancels classes and exams that were scheduled for next week.

12:47: Four rockets were intercepted over Netivot in another attack a few minutes ago.

12:46: Arab media reports that Egyptian soldiers fired at a terrorist at Kerem Shalom that was on his way to carrying out a suicide attack.

12:29: IDF Brig.-Gen. (reserves) Amal Assad explained to Channel 2 News that while the entire world is concerned for the women and children of Gaza, Hamas remains a terrorist organization that is genuinely uninterested in the civilian population.

12:17: El Al and Arkia Airlines are sending special flights to Turkey to get stranded travelers out of that country as quickly as possible.

11:43: Following the death in a rocket attack of the Thai farm worker in Kibbutz Netiv HaAsarah, the Defense Ministry plans to bring additional portable shelters to the area kibbutzim in the hope of cutting the distance farm workers have to run for cover. The victim was running to a shelter on Wednesday when the rocket struck him.

11:40: Nine people were  injured lightly in the rocket attacks earlier to the Gush Dan, Shvelah, and Sharon regions. Two of the victims fell while running for cover. An additional seven people are being treated for hysteria.

11:39: The Iron Dome intercepted rocket fire in the Sderot area.

11:35: Sirens at this time in Sderot and surrounding area communities.

11:31: Some European carriers have agreed to resume flights to Israel. Read the report.

11:12: One again, HKBH has protected us with his true Iron Dome as rockets fired into major population centers were intercepted and there are no reports of injuries. Clearly Hamas is trying to continue firing into the areas near Ben-Gurion International Airport in the hope of shutting down international air travel to Tel Aviv .

11:03: B”H at present there are no reports of fatalities or wounded from Magen David Adom or Ichud Hatzalah at this time. Two rockets have been intercepted by the Iron Dome over Holon and over Bilu Junction in the Shvelah region.

10:37: The IDF is directing artillery fire into Shajaia and Beit Hanoun. A number of soldiers have been lightly wounded in the fighting this morning.

10:19: Brazil has condemned the IDF counter-terrorism operation in Gaza and has recalled its ambassador to Israel for consultations.

09:26: 109 IDF soldiers and officers remain hospitalized this morning including;

09:24: Three IDF wounded arrive in Barzilai Hospital in Ashkelon by chopper. There is no information on their conditions at present. In addition to the three, there are 12 soldiers admitted to the hospital.

08:22: Sirens sounded in the Eshkol and Shar HaNegev Regional Councils a short time ago.

07:06: A senior IDF source reports that to date, 31 tunnels were discovered in Gaza, of which nine were destroyed or neutralized.

06:53: Four rockets exploded in the Eshkol Regional Council area during the night.

06:50: In a sign of solidarity, Jerusalem Mayor Nir Barkat instructed the municipality to display thousands of national flags around the capital.

06:39: Gaza reports 16 people were killed by IDF forces during the night.

06:38: The levaya for IDF soldier Sgt. Li Mat is scheduled to take place on Thursday, 26 Tammuz at 18:00 in the Har Herzl Military Cemetery in Jerusalem.

06:33: US media reports the FAA is considering removing ban on flights to Tel Aviv.

00:20: Late Wednesday evening, Finance Minister Yair Lapid told the media that the cabinet may decide to retake Gaza in order to completely root out the terrorist threat and destroy their infrastructure.

00:08: Turkey’s national carrier has extended its suspension of direct flights to Tel Aviv for another day for security reasons due to the ongoing conflict between Israel and Hamas, Turkey’s communications minister says.

UPDATE: 12:20AM IL: With the clock striking midnight on Wednesday evening / Thursday morning, Israel has now entered “Day 17 of Operation Protective Edge”. Stay with YWN as we continue our non-stop 24 hour news coverage – updated just seconds after an event occurs.